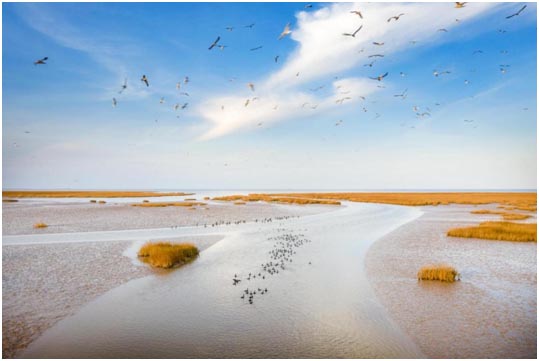 Li Ruitian, who works for a demonstration base of modern agricultural experiment on saline-alkali soil in the Yellow River Delta in east China’s Shandong province, squatted down to check on the growth of crops in a vast expanse of green farmlands as lush crops swayed in the spring wind.

Just a few years ago, the fertile land beneath his feet was saline-alkali soil in endless whiteness, while now it’s the demonstration base of the Agricultural High-tech Industrial Demonstration Area of the Yellow River Delta in Dongying city, Shandong province.

In the vast river delta where China’s second-longest waterway, the Yellow River, splits and spreads out into several branches before entering the sea, fresh water mingles with salt water, creating a fragile ecological environment.

Due to the high salt content in soil, almost no plants grew in the Yellow River Delta, except a few saline-alkali tolerant ones like seepweed.

At the same time, Li became a staff member, taking care of the new varieties of saline-alkali tolerant crops planted by researchers in the experimental fields of the demonstration area.

Following the establishment of the demonstration area, a major campaign was launched to leverage scientific and technological achievements to bring new looks to the estuary of the Yellow River in Dongying city.

The once barren river delta has been adorned with an increasing number of green plants, thanks to the efforts to promote the application of high and new technologies and the support from favorable policies and measures rolled out by the local government.

“Our team has searched every corner of the Yellow River Delta for high-quality germplasm resources in a bid to breed saline-alkali tolerant plants,” said Xu Hualing, head of the halophyte and eco-agriculture research center under the agricultural science research institute of Dongying city.

According to Xu, The Agricultural High-tech Industrial Demonstration Area of the Yellow River Delta has built a germplasm resource bank, serving as a solid foundation for subsequent efforts to breed saline-alkali tolerant plant varieties. Up till now, the bank has collected a total of 15,000 copies of germplasm resources covering domestic and foreign halophytes of 89 species, 42 genera and 13 families, with the types of the salt-tolerant plants including food crop, forage grass, medicinal plant, vegetable and fruit.

Research teams concentrating on breeding such varieties have preliminarily developed 37 new varieties and planted them in 92,000 mu of land for demonstration. These new plant varieties have increased the yield of land by 15 percent to 20 percent per mu.

By installing water-saving irrigation devices, such as micro spray hose and dripping irrigation tubing, researchers have continuously reduced the salt content in the soil of the Yellow River Delta and significantly improved the soil properties.

During the past nearly three years, soil fertility in the demonstration base of modern agricultural experiment on saline-alkali soil has been generally raised by one to two grades.

Wang’s team has just been laying drip irrigation pipes in the experimental fields of the demonstration base. The team hopes to reduce the salt content in the soil of the area from between 0.4 percent and 0.6 percent to less than 0.3 percent and save fresh water by more than 38 percent in irrigation in three years.

The Agricultural High-tech Industrial Demonstration Area of the Yellow River Delta is listed among the country’s national high-tech industrial development zones and enjoys related current policies, according to the State Council’s reply to the proposal submitted by Shandong province for the establishment of the demonstration area.

In collaboration with research institutes, the demonstration area has built five pilot-scale research and development platforms for work related to smart agricultural machinery, seed breeding for saline and alkaline land, biotechnology, beneficial insect resource, and observation of saline-alkali land ecosystem as well as a protected agriculture test and validation platform. So far, it has gathered 116 expert teams from 56 scientific research institutes.

China has 1.5 billion mu of saline-alkali land, with 500 million mu has the potential for development and utilization.

It is anticipated that the development of saline-alkali tolerant crops would play an important role in guaranteeing food security in China, and more saline-alkali land in the country would become high-yield farmland.