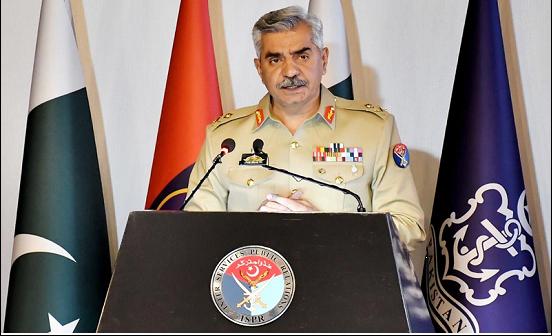 RAWALPINDI: Inter-Services Public Relations (ISPR) Director-General Major General Babar Iftikhar Thursday clarified that the word “conspiracy” was not used in the statement issued after a meeting of the National Security Committee (NSC) last month. Addressing a press conference on the recently held 79th Formation Commanders’ Conference, the DG ISPR said he cannot discuss what was discussed in the meeting, but noted that the word “conspiracy” was not used. He, however, said that the stance of the military leadership was conveyed in the meeting as well as the statement issued after it. “Whatever the meeting concluded is present in the statement.” He said that Pakistan’s military agencies are working day and night against such plots and will not let them get successful. In response to a question, the DG ISPR said the “cyphers” are top-secret documents that are sent to the Foreign Office by Pakistani ambassadors from across the world. “…we also receive some of these [cyphers] at the directorate of the Inter-Services Intelligence that is considered to be related to national security,” the military’s spokesperson said. ISI had started its work when the cypher was received on March 7 or 8, and based on that, it gave its input to the NSC, the DG ISI said, but noted that cyphers come under the domain of the Foreign Office and only those related to the national security were shared with the military.