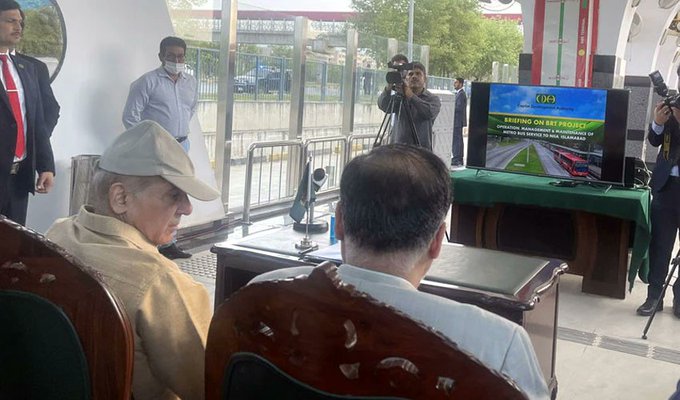 ISLAMABAD: Prime Minister Shehbaz Sharif, while expressing concerns over worrisome economic indicators, has ordered immediate steps to control inflation in the country. PM Shehbaz on Thursday chaired a meeting where he was briefed on the prevailing economic situation of the country by the Ministry of Finance. The meeting was attended by PML-N leaders Shahid Khaqan Abbasi, Ahsan Iqbal, Miftah Ismail, Zubair Umar, party spokesperson Marriyum Aurangzeb and others, including authorities concerned. During the meeting, PM Shehbaz said that efforts are being made on an emergency basis to make the country economically strong. He directed his economic team to prepare a detailed strategy for relevant reforms. “Steps should be taken to improve the economic condition of the common man in any case,” the premier said. Moreover, he also issued directives for efforts to be made on priority basis to control inflation. Meanwhile, the Ministry of Energy presented the charge sheet of the former government’s “incompetence” to the prime minister. The Power division presented the document during a meeting over energy and power load shedding, chaired by PM Shehbaz. Sources privy to the matter said that the premier was informed during the meeting that there was no shortage of electricity in the country, but the industries were shut due to lack of fuel and technical faults, while some of the units of 18 powerhouses have been dysfunctional due to technical faults and seven power plants were shut due to unavailability of fuel. Moreover, the Power division’s report stated that the technical faults were not rectified and timely repairs and replacement of spare parts were not done under the former government. Most of these faults were administrative in nature, while some were due to policy decisions. The prime minister expressed displeasure over the situation and directed immediate redressal of the faults and flaws. Prime Minister Shehbaz Sharif Thursday issued orders of the first inquiry against the PTI-led government for a delay in the launch of a metro bus project pending for the last four years.  He directed the Capital Development Authority (CDA) to operationalise the Islamabad Metro Bus Service from April 16. The premier, at 7am, visited the Peshawar Morr metro bus station and reviewed the on-ground progress of the project. Islamabad Metro Bus Service was launched by former prime minister Nawaz Sharif in 2017 and was due to become functional in 2018. PM Shehbaz Sharif directed to run the metro bus service from Peshawar Morr to Islamabad International Airport in order to facilitate the passengers travelling towards the airport. He also ordered to carry out a feasibility study as per Public Procurement Regulatory Authority (PPRA) rules for two additional routes, namely from Rawat and Bhara Kahu, connecting the airport.