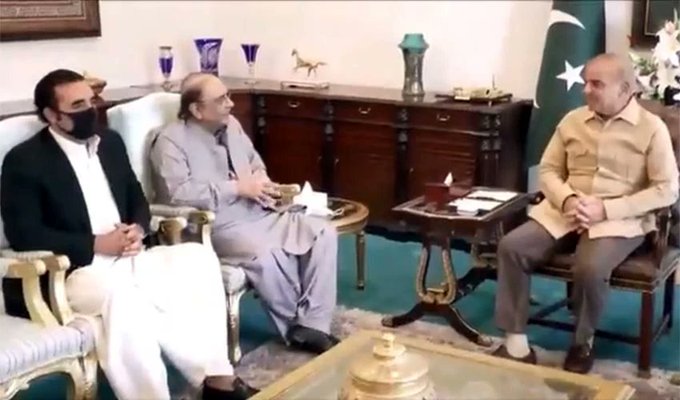 KARACHI:Former president and PPP co-chairman Asif Ali Zardari called PTI chairperson Imran Khan a liar, saying his hatred is not for Imran Khan, but his mindset,  During an interview, Asif Ali Zardari called former prime minister Imran Khan a liar. “Imran Khan has been lying since the beginning, though we do not hate him, but his mindset,” said Asif Zardari. Zardari also rebutted Imran Khan’s allegation of ousting him through a no-confidence motion with the help of the US. PTI chairman Imran Khan is the first prime minister of Pakistan to have been voted out through a no-trust motion.  On Saturday, the National Assembly conducted a vote on the no-trust motion against Imran Khan and a total of 174 votes were cast in favour of the motion. “We had been in contact with Khan’s allies for the last three years to remove him from power,” said Zardari, adding that he also held secret meetings with PM Shehbaz Sharif in connection with the no-trust motion against Imran Khan. Talking about wooing Khan’s allies to vote against him in the no-trust motion, the former president went on to say, “I am a guarantor in all agreements made with allies and we will fulfil all of their legitimate demands.” “I am also a guarantor with MQM-P, however, someone has misguided PML-Q, but we still want them to join us,” he said. Responding to becoming a part of PM Shehbaz’s cabinet as PPP has the second-largest members in the NA of the coalition government, Asif Zardari said Bilawal inclusion will be decided according to the party’s Central Executive Committee (CEC). “Bilawal Bhutto as Foreign Minister of Pakistan will be decided in PPP’s CEC meeting,” he said.Other Side President of the Pakistan Peoples Party Asif Ali Zaradri and Chairman Bilawal Bhutto Zardari Thursday called on Prime Minister Shehbaz Sharif here and congratulated him on assuming the premiership. The prime minister thanked both the PPP leaders for their cooperation in formation of the coalition government. He prayed to Allah Almighty to enable the incumbent government to overcome the prevailing challenges. The prime minister said that his government’s priority was to strive for Pakistan’s uplift through consultation and mutual cooperation.