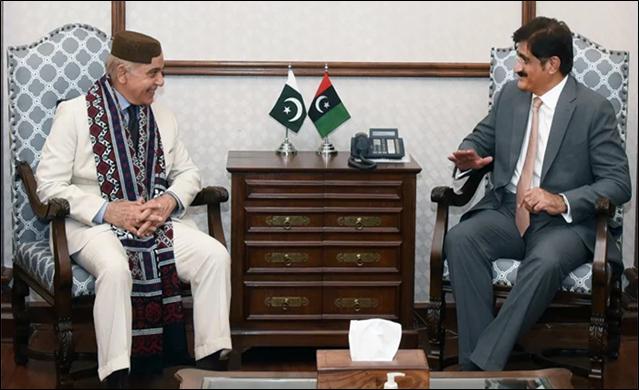 KARACHI: Newly elect Prime Minister Shehbaz Sharif Wednesday said Pakistan would request China to include Karachi Circular Railway (KCR) in the China-Pakistan Economic Corridor (CPEC) projects. Shehbaz was in Karachi on a day’s visit and has left for Islamabad after paying his respects at the Quaid-e-Azam mausoleum and meeting Chief Minister Sindh Murad Ali Shah and MQM-P leaders. Speaking to journalists, after his one-on-one meeting with CM Shah — where they discussed political, economic, and several other issues of the province — Shehbaz mentioned that earlier Chinese authorities had shown interest in KCR; however, due to political changes, things weren’t finalised. Shehbaz assured CM Sindh regarding the federal government’s support for the development and betterment of the province. Terming Karachi’s drinking water issue, the “biggest challenge”, the premier said that he has requested CM Sindh and other relevant authorities to complete the programme — under which half capacity requirement will be fulfilled —by 2024 directing him to ensure that full capacity requirement is met. He said: “We will be following the will of Allah if we are able to resolve Karachi’s drinking water issue.” Highlighting Orange Line, and Green Line projects, Shehbaz said he has asked Shah to bring air-conditioned buses to Karachi. “I have suggested Shah bring thousands of air-conditioned buses in a transparent manner while pre-qualifying transporters followed by a bidding.” he said, adding that transporters will then be allowed to take a loan from banks at minimal interest rates. He also acknowledged the Sindh government and the chief minister for their warm hospitality. The PM was also presented with ajrak by the Sindh CM.