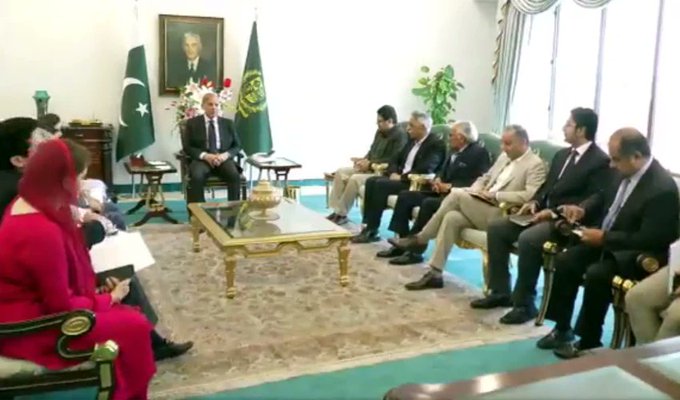 ISLAMABAD: Prime Minister Shehbaz Sharif on Tuesday in a meeting with economic experts issued directives for formulating financial proposals on an emergency basis to address the current economic situation in the country. The PM Office, in a statement, said the directives came during the newly elected prime minister’s meeting with his economic team as he seeks to steer the country out of the financial crisis. The proposals will be devised in line with the consultation with stakeholders in areas including agriculture, trade, investment, and banking, the statement said. A meeting will be held in the next few days to discuss the suggestions of the economic experts. The prime minister also decided to form the National Economic Council (NEC) to be comprised of independent financial experts. In view of the challenging economic situation, he directed the setting of medium and long-term fiscal policies and also stressed the presentation of comprehensive policy options to overcome inflation. PM Shehbaz emphasised a reduction in prices of daily-use commodities and essential items, particularly during the month of Ramazan. He also stressed the need for maintaining a balance between the national and public interests. During the meeting, the secretary of finance gave a briefing to the prime minister on the economic situation, revenues, budget deficit, and loans besides the overall national balance sheet. In a press conference after the meeting, ex-finance minister and PML-N leader Miftah Ismail said that Pakistan’s deficit stood at Rs5,600 billion as he slammed the ousted PTI-led government for pushing the country toward economic turmoil. “This is the highest deficit in Pakistan’s history by far. Earlier, the PTI government had predicted a deficit of Rs3,990 billion, later a reporter didn’t agree and claimed it would stand at Rs4,300 billion, but I had said that it would move up to Rs4,600 billion, unfortunately, I was wrong,” Ismail told journalists. Ismail said the state in which Imran Khan’s government had left the economy was an injustice to the people of Pakistan as the inflation was increasing with every passing day due to their policies. The member of the newly elected premier’s economic committee lashed out at the PTI-led government for announcing the subsidies — on fuel, electricity, and others — which, he claimed, were not maintainable. “…I have to say this with a heavy heart that the statements the ministers made were erroneous as they cannot finance [the subsidy package] on their own, the deficit is increasing by Rs373 billion,” Ismail said. He further said Imran Khan — when he saw his government was about to be ousted — announced relief measures, which put the country’s economy and future at stake. Ismail also berated the ex-prime minister for granting subsidies to businesses .