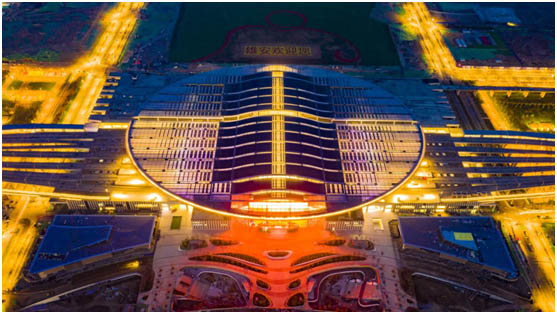 Xiong’an New Area, a national-level new area in north China’s Hebei province and a national model of high-quality development, is believed to be a mirror of the future China.

Over the past five years, China has advanced the construction of Xiong’an New Area according to high standards and quality requirements, making constant new progress in the construction and continuously bringing new looks to it.

Today, as the top-level design and the master plan for the new area are gradually turned into realities and the construction of the new area proceeds at full throttle, a great city begins to take shape.

More than 200 projects are slated to enter the construction period in Xiong’an New Area this year, with the total investment estimated to exceed 700 billion yuan ($110 billion). In February this year, the new area kicked off a good number of projects scheduled to begin in the first quarter of 2022, including 43 key projects worth of 60.1 billion yuan, among which 16 are major ones with an investment of more than one billion yuan.

Construction of the first batch of projects designed to serve China’s centrally-administered state-owned enterprises (SOEs), which is a part of the plan to shift Beijing’s functions nonessential to its role as the capital to Xiong’an New Area, as well as three industrial park projects of China’s three major telecom operators, namely China Telecom, China Mobile, and China Unicom, has been comprehensively set in motion.

Major landmark projects for public service facilities in the new area, including sports center and library, have also commenced construction.

In fact, except for some basic projects and temporary buildings for essential needs, no construction task was carried out during the first more than two years since the official announcement of the establishment of Xiong’an New Area.

During that period, more than 1,000 experts from home and abroad, over 200 teams, and over 2,500 professional technicians worked tirelessly to formulate a master plan for the new city, finally drawing up a grand blueprint for the new area, which is considered a national project of millennial significance.

The blueprint has been implemented thoroughly. Xiong’an New Area will be historical heritage Chinese people leave for the future generations, according to Chinese President Xi Jinping, who stressed the necessity to adhere to the ideas of “global vision, international standards, distinctive Chinese features, and future-oriented goals” in the construction of the new area so as to develop it into a demonstration zone of innovation-driven development.

Xiong’an New Area is believed to be a national pacesetter of high-quality development. The new area has introduced strict regulations on the styles and features of the area and its landmarks. It has made clear that there will be no outlandish building, skyscraper, or glass curtain wall in the area. “Urban diseases”, such as “overhead spider webs” formed by unsightly power lines and telecommunications cables and “road zippers” caused by repeated replacement of buried pipes, are all expected to be solved in Xiong’an New Area by well-designed underground pipe gallery.

In the long term, the new area will be able to sustain a population of two million to 2.5 million and be equipped with high-quality resources in education and health.

“According to our plans for the new area, all of the government-funded new construction projects and large public buildings in the area will meet the three-star standard (the highest in China) of green buildings, and a 15-minute radius community life circle will be built here,” said Wang Zhigang, deputy head of the planning and construction bureau of Xiong’an New Area.

“We have been strictly implementing relevant high standards and quality requirements,” he added.

Xiong’an New Area has been known as an eco-friendly city. During the past five years, the area has planted 454,000 mu (about 30,267 hectares) of trees, including more than 23 million trees of economic value, fruit trees, and ornamental trees, increasing the local forest coverage rate from 11 percent to 32 percent.

With parks, tree belts, and forests located within 300 meters, 1,000 meters, and 3,000 meters, respectively, from residential communities, Xiong’an New Area is turning the idyllic urban scenery and life that urbanites yearn for into a reality.

Urban computing center serves as the “brain” that performs the computing and storage functions for various smart administration systems of the area; IoT platform and network of video monitoring systems, which are to Xiong’an New Area as “nerves” are to human body, are responsible for the management of IoT devices and video monitoring devices; and CIM platform is the digital twin of the new area.

Whenever a building is erected in the new area, a digital building with the same features is created on the digital platform of the area. Even the slightest change to the area, such as the replacement of a street lamp, can be simultaneously reflected on the digital platform.It’s believed that Xiong’an New Area will truly march toward a new stage of “digital twin cities”.

The new era calls for high-quality urban development models and governance ideas. The Xiong’an New Area will be built into a “city of the future,” and its construction process demonstrates a systematic exploration of a new urban development paradigm. China’s futuristic city urban practices can contribute a holistic “Chinese solution” to the world.