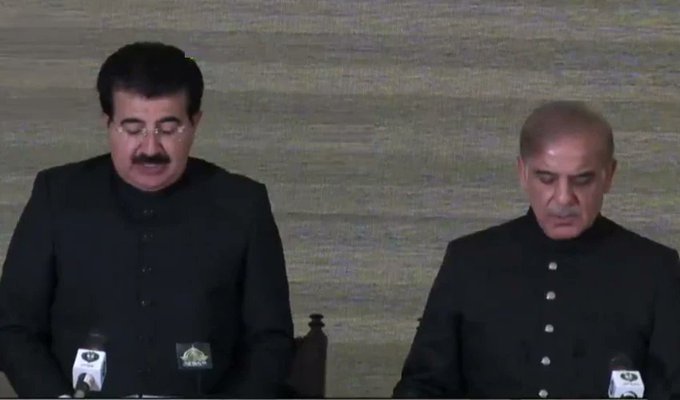 ISLAMABAD: Shehbaz Sharif took oath on Monday as the 23rd prime minister of Pakistan. He was administered the oath by Senate Chairman Sadiq Sanjarani as President Arif Alvi complained of “discomfort”, according to the president’s Twitter account, hours before the oath-taking ceremony. Shehbaz was elected as the premier after the ouster of PTI Chairman Imran Khan through a no-confidence motion.  Earlier in the day, Shehbaz secured 174 votes in the NA as opposed to PTI’s candidate Shah Mahmood Qureshi, who received no votes after his party decided to boycott the polling process. The poll took place under the chairmanship of MNA Ayaz Sadiq, two days after the lower house of Parliament voted in favour of removing Imran Khan from office, following a nearly 14-hour standoff between the Opposition and Khan’s ruling party that started on Saturday morning. Shehbaz is the longest-serving chief minister of the Punjab province, having served on the post three times since he began his political career nearly four decades ago. Sharif is the son of Mian Muhammad Sharif, a well-known businessman, and the younger brother of Nawaz Sharif, the former prime minister of Pakistan. Shehbaz is a graduate of the Government College in Lahore. He first came into the spotlight in 1985, when he was appointed the president of the Lahore Chamber of Commerce and Industry. But his foray into politics began in 1988 when Sharif was elected as a member of the Punjab assembly (MPA). He served for a short stint, till 1990 when the assembly was dissolved.