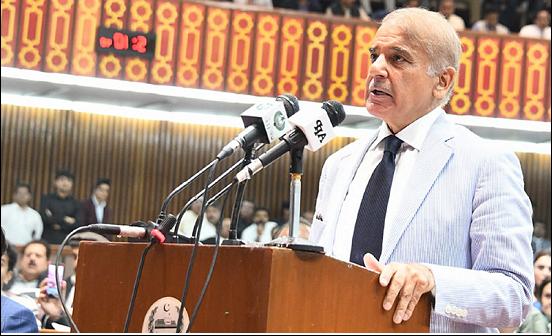 ISLAMABAD: Following the ouster of PTI chairman Imran Khan from the office of the prime minister, the Opposition’s joint candidate Shehbaz Sharif was elected as the 23rd premier of Pakistan Monday. Shehbaz secured 174 votes as opposed to PTI’s candidate Shah Mahmood Qureshi, who received no votes after his party decided to boycott the polling process. The poll took place under the chairmanship of MNA Ayaz Sadiq,  two days after the lower house of Parliament voted in favour of removing Imran Khan from office, following a nearly 14-hour standoff between the Opposition and Khan’s ruling party that started on Saturday morning. The Monday session formally started after a brief delay with a recitation of the Holy Quran and naat, with NA Deputy Speaker Qasim Suri in the chair.  The session, however, has been adjourned till 4pm on Wednesday, April 16. Taking the floor, the newly elected prime minister Shehbaz thanked the Almighty Allah for his uncountable blessings. He mentioned that Almighty Allah has protected the country which was also because of the hectic efforts of the leaders of the joint Opposition members. The premier mentioned that it was for the first time in the history of Pakistan that a prime minister was ousted through the no-confidence motion. Terming today a “historic day”, he mentioned that the happiness of the people can be seen through the economic indicators. Shehbaz mentioned that the rupee regained its value — which was trading at Rs190 per dollar and closed at Rs182 per dollar today. “Imran Khan was the person who said that when rupee gains Re1 against the US dollar then the prime minister of the country is a corrupt person now he should see that the rupee has recovered around Rs8,” he said. He acknowledged the Supreme Court’s “unanimous” verdict saying that the day when the apex court gave its judgment should be marked as a “historic day” in the history of Pakistan.