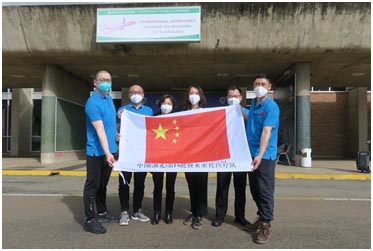 “China’s anti-COVID-19 measures have protected the people’s right to life and health to the utmost, which conforms to the country’s whole-process people’s democracy. This is a democracy that truly puts the people in the first place,” said Mathibeli Mokhothu, Lesotho’s Deputy Prime Minister and leader of the Democratic Congress (DC) political party of the country, in an interview with People’s Daily at his official residence.

Mokhothu, who applauds the people-centered philosophy of development advocated by Chinese President Xi Jinping, noted that China successfully contained the spread of the novel coronavirus by decisively introducing effective measures, which is a vivid manifestation of the Chinese government’s people-oriented governance philosophy.

“Under the leadership of the Communist Party of China (CPC), China completed the arduous task of eradicating absolute poverty, which shows that the CPC works for and relies on the people and respects their principal status, and represents a major victory the CPC has achieved by basing efforts on the interests of the people,” he pointed out.

“I was impressed by Xi’s friendliness and political sagacity. His characteristic modesty is admirable,” said Mokhothu, who expressed great respect for the Chinese leader in the interview.

Mokhothu began to serve as leader of the DC political party in 2019, and assumed office as Lesotho’s Deputy Prime Minister and the Minister of Parliamentary Affairs one year later.

As a young politician, Mokhothu enjoys learning wisdom and experience in governance. In his opinion, the long-term stability of the Chinese society results from good governance, and the essence of which lies in strong leadership.

“Chinese leaders have a lot of governance experience that is worth learning from by officials in other countries. Developing hand in hand with China is a blessing for the rest of the world,” he said.

“President Xi cares deeply about Africa. Whenever he talks about Africa, he exudes brotherly affection for the continent, which warms our hearts,” Mokhothu noted.

“He is always smiling. He talks to visitors from Africa in a soft tone, just like talking to old friends. Every word he says shows his concern for the actual needs of Africa,” he added, who noted that Xi’s remarks and acts in international diplomatic activities demonstrate China’s principles of and wisdom in diplomacy, as well as its impressive sense of responsibility as a major country.

Mokhothu has read carefully “Xi Jinping: The Governance of China”, a three-volume collection of speeches and writings by Xi. He said that he has learned a lot of wisdom in governance from the book and found it helpful in his own political life.

“I studied pedagogy in college, so I understand how important reading is to the shaping of a person’s knowledge and character. It is amazing that Xi not only reads, but is able to draw wisdom in governance from ancient Chinese classics,” he told People’s Daily.

To judge whether a leader is good or not, Mokhothu believes, is to see whether he has a firm belief in the future development of the country and the nation, and whether he is equipped with strong governance capabilities. “President Xi has a strong sense of responsibility, mature ruling experience and political wisdom, as well as innovative spirit and enterprising spirit,” he said.

“I also noticed that Xi is fond of sports,” Mokhothu said. He was really excited when moving on to the topic, as he is a sports fan himself.

“Under the leadership of Xi, China has held many large-scale sports events,” he noted. Sports require collaboration, which means leading a team in setting goals, solving problems along the way, and finally winning.

As the leader of the DC political party, one of the ruling parties of Lesotho, Mokhothu spoke highly of the party’s close exchanges and interactions with the CPC in recent years. He believes that through such inter-party exchanges, the capacity building of party and government officials in Lesotho has been rapidly strengthened, and the country’s governance capacity has seen steady improvement.

The 20th National Congress of the CPC to be held in the second half of 2022 will not only be a major event in China’s political arena, but attract worldwide attention, according to Mokhothu.

“China is proving the strengths of its social system through sustainable development; China’s affairs are ultimately determined by the will of the Chinese people,” he said.

Since the outbreak of the COVID-19 pandemic, China and Lesotho have been supporting and helping each other, according to Mokhothu.

In February 2020, when China was struck by an outbreak, Letsie III, King of Lesotho, wrote a letter to Xi to express sincere solicitude and strong support for China on behalf of the government and people of Lesotho.

To help Lesotho overcome the pandemic, China has provided multiple batches of anti-epidemic materials for the country, and shared with it China’s epidemic prevention and control strategies and diagnosis and treatment formulas through a series of video conferences.

In September 2020, China dispatched an anti-epidemic medical team to Lesotho to provide assistance for the country at the invitation of the latter. In August 2021, the first batch of COVID-19 vaccines provided by the Chinese government arrived in Lesotho.