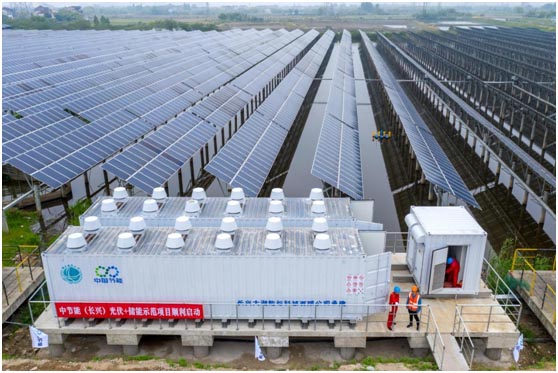 A compressed air energy storage project in Jintan district, Changzhou city, east China’s Jiangsu province, has turned a salt cavern located at 1,000 kilometers underground into a giant “power bank” that can store 300,000 kWh of electricity in an energy storage cycle, which is equivalent to the amount of electricity consumed by 60,000 residents a day.

The project uses electric energy to compress air into the salt cavern during off-peak hours, and releases the compressed air to drive turbo-expander for power generation when demand for electricity increases.

Such “power banks” can not only complement unstable photovoltaic and wind power generation and increase the proportion of renewable energy sources in power generation projects, but also improve the flexibility of electric power systems by helping with frequency regulation and peak shaving in coordination with fossil fuel power plant, nuclear power plant, or other types of power plants using conventional energy sources.

China aims to steer new types of energy storage from the initial stage of commercialization to a stage of large-scale development by 2025, when the country will be able to carry out large-scale commercial application of relevant technologies, according to a recent plan on the development of new types of energy storage during China’s 14th Five-Year Plan period (2021-2025) released by Chinese authorities.

While new-type energy storage facilities mainly helped with frequency regulation as auxiliaries of fossil fuel power plants in the past, they will play an independent role in the market, as the plan pointed out.

The country will promote the market-oriented and orderly development of new types of energy storage and give full play to the decisive role of market in resource allocation, said the document.

“After their independent role in the market is recognized, new-type energy storage facilities will be able to independently take part in activities including connection to power grid, distribution of power, and settlement of transaction along with the introduction of electricity price policies, which will help accelerate their marketization process,” said Chen Yongchong, head of the energy storage technology research team of the Institute of Electrical Engineering under Chinese Academy of Sciences.

Diversified technological routes are expected to be taken in the development of new types of energy storage in the country.

“Currently, lithium-ion battery is the most popular choice among all energy storage technologies. It is adopted by more than 80 percent of the new-type energy storage projects under construction, while other technologies, such as flow battery, lead-acid battery, and thermal (cold) energy storage, are far less used,” said Chen.

Energy storage technologies have their own characteristics, he said, adding that various energy storage paths will develop in parallel.

While putting forward direction for the research and development of energy storage technologies, the plan encouraged different technological routes to “bloom at the same time” and stressed the importance of optimizing the allocation of innovation resources.

Since the beginning of the 13th Five-Year Plan period (2016-2020), new types of energy storage have realized the transition from the stage of research, development and demonstration to the initial stage of commercialization, achieving substantial progress.

The country is among the world’s leaders in energy storage technologies including lithium-ion battery and compressed air technologies. Its total installed capacity of new types of energy storage had surpassed four million kW by the end of 2021.

As China is witnessing a rapid increase in the amount of electricity generated from new energy sources, it’s believed that the ratio will see significant growth in the country.