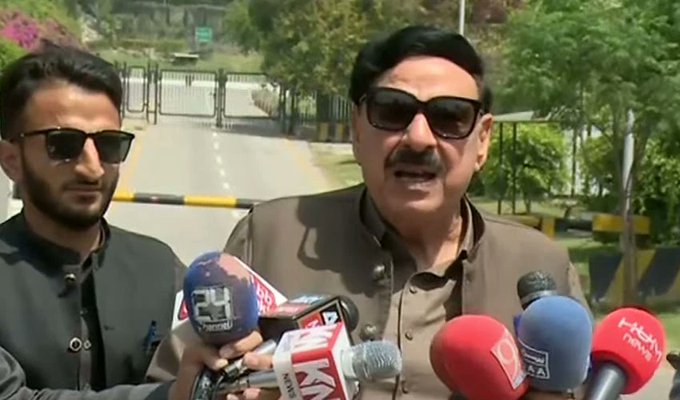 ISLAMABAD: Interior Minister Sheikh Rasheed — who was restored as a cabinet member just a day back after the Supreme Court’s landmark judgement — has said mass resignations from the treasury benches could resolve the current political turmoil. “I used to suggest three months back: tender your resignations, dissolve the assemblies, impose an emergency, impose governor’s rule. I was right in all instances,” the interior minister told journalists in the federal capital. “I stand by my decision of mass resignations. We should take to the streets and expose these hired guns [the Opposition]. They will [compromise] on Pakistan’s foreign policy,” the interior minister said. The Supreme Court of Pakistan restored the National Assembly (NA) after it declared the government’s decision to dissolve the assembly and NA Deputy Speaker Qasim Suri’s ruling against the Constitution. The top court has ordered NA Speaker Asad Qasier to summon the session on Saturday (April 9) no later than 10:30am to allow the vote on the no-confidence motion against the premier. Moreover, the interior minister said the nation was well-aware of who did what, as he hoped of hearing “good decisions” from Prime Minister Imran Khan later today evening — when he addresses the nation. Despite being clean bowled by the Supreme Court’s judgement, giving the PTI-led government a major setback, PM Imran Khan has pledged to fight for Pakistan “till the last ball.” To review the latest situation, the prime minister has called a federal cabinet meeting today — which started at 2pm — after almost a month’s hiatus, while he will also chair a meeting of the PTI’s parliamentary party later in the day. “I have called a cabinet mtg tomorrow as well as our parliamentary party meeting, and tomorrow evening I will address the nation,” the prime minister said in a tweet after the order was issued.