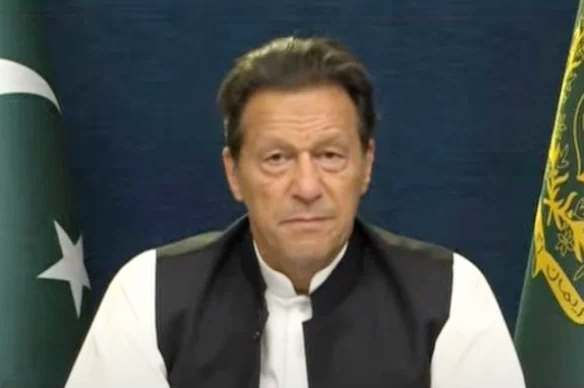 ISLAMABAD: Prime Minister Imran Khan Friday addressed the nation and said that he will not tolerate the installation of a “foreign government” in Pakistan and that he will turn to the public for support if such a thing happens.  “We are not a nation that can be used like tissue papers,” the premier said during a live telecast, maintaining that Pakistan does not want unilateral relations with any country. Reiterating his stance on the no-confidence motion, he said that he will never accept an “imported government” and will look up to the public for their decision. He said: “They [the Opposition] wants to get rid of the corruption cases registered against them.”  The premier further questioned that if they [the Opposition] is so confident, why are they afraid of holding elections? PM Imran Khan urged the nation to come out of their homes on Sunday after Isha prayers for a peaceful protest.  “All the people should come out of their houses to protest against the ‘foreign-funded drama’ and I will be there with you as I will never accept this foreign conspiracy against Pakistan,” he concluded. The PM said that while he respected the decision of the Supreme Court regarding the restoration of the National Assembly, he is saddened by the verdict. Recalling the time when he was arrested, the premier said that he strongly believes that the judiciary is the guardian of justice in the country.  The premier said that while he respected the country’s judiciary, he complained that the Supreme Court should have at least initiated the probe on the “foreign conspiracy” matter. “I respect the Supreme Court and the judiciary, but the apex court should have looked at the threat letter before issuing the verdict,” he said.  PM Imran Khan further complained that the apex court did not take the matter of the “threat letter” as seriously as it should have been taken.