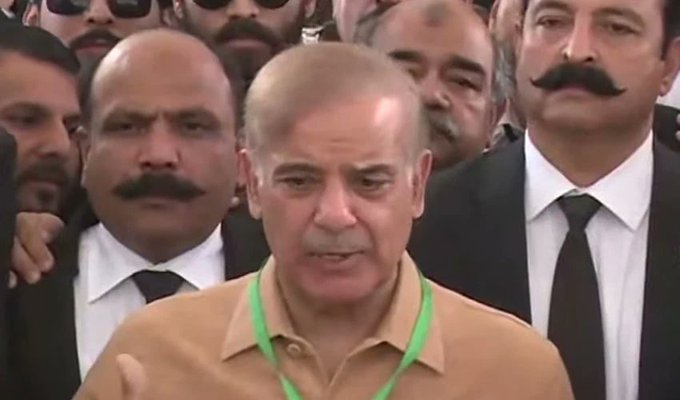 ISLAMABAD : Pakistan Muslim League-Nawaz (PML-N) President Shehbaz Sharif has said restoring dignity of the parliament and transparent elections are important for the country. Talking to the media persons outside Supreme Court of Pakistan, Shehbaz Sharif expressed the confidence that the apex court will soon announce verdict in the suo motu case regarding political situation, in view of the adverse impact of current uncertainty on the economy. Shehbaz Sharif while bashing Prime Minister (PM) Imran Khan, said that there is no difference between Imran Khan and Adolf Hitler. Shehbaz Sharif further stated that Hitler had taken over Germany by scrapping over the country. The PML-N leader also said that due to wrong policies Pakistan has been pushed many decades back as there is poverty and unemployment in the country whereas inflation has risen sky high. The Pakistan Democratic Movement (PDM) leader also said that to save the country, we have to empower the Parliament. Whereas, PML-N leader Muhammad Zubair has said the current political situation is badly affecting the country s economy. Talking to the media persons, he said if the PTI had evidence of foreign conspiracy, it should have presented the same with the Supreme Court. On the other hand, Pakistan Tehreek-e-Insaf (PTI) Vice Chairman Shah Mahmood Qureshi has said the threat letter is a clear interference in the internal affairs of Pakistan. Talking to the media persons in Islamabad, he rejected the impression that the document is fake saying a judicial commission can be constituted to probe it.