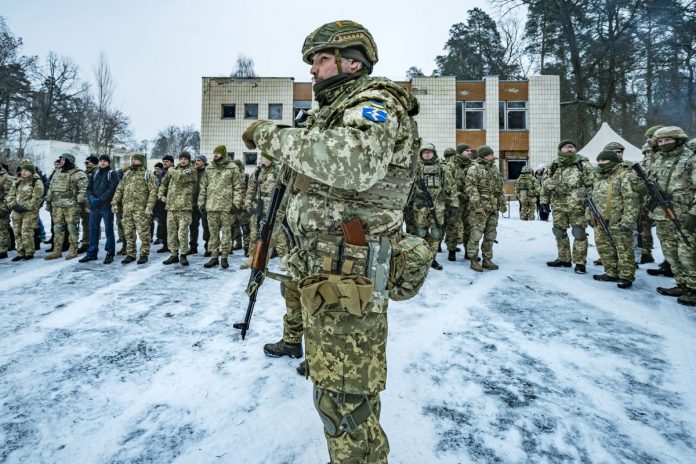 By Zhong Sheng, People’s Daily
The Ukraine crisis is putting even bigger pressure on the already-sluggish world economy. However, a former official of the U.S. Department of Defense disclosed that many in the lobbying firms, the defense industry, and the Capitol are opening champagne bottles for celebration.
Statistics indicated that the stock price of Lockheed Martin rose more than 13 percent between Feb. 24 and March 28, and the figures were respectively 13.4 percent and nine percent for Northrop Grumman and General Dynamics.
Such a big rise came just after Russia and Ukraine started the war. Who is making a fortune out of it and who is willing to see the war protracted? The answers are clear.
Philip Zimbardo, a retired professor of Stanford University, says in his book The Lucifer Effect: Understanding How Good People Turn Evil that wars are prepared and “cooked” by some people, without whom wars cannot be launched.
There happens to be a “beast” in U.S. politics that is obsessed with “cooking” wars – the military-industrial complex. It is a huge interest group consisting of military departments, weapon manufacturers, legislators, defense research institutes and think tanks. It is constantly attempting to destabilize American diplomacy to reap gigantic profits from the wars, conflicts, and arms races it provokes.
According to an article recently published by Spanish news site Rebelion, it is critical for the U.S. and its media, as well as the military-industrial complex that to a large extent dominates the country, to have some fabricated enemies that are able to be manipulated.
Provoking a conflict between Russia and Ukraine and seeking private gains from it, the U.S. military-industrial complex is just counting its chickens before they are hatched. It forces U.S. foreign polices to challenge Russia through interest groups, and sells security anxiety by exaggerating Russia’s “military threat,” so as to exacerbate the necessity for European countries to increase defense expenditure and enhance military deterrence.
According to a report by the U.S. Department of Defense, the U.S. has provided more than $2.7 billion in security assistance to Ukraine since 2014. It also agreed to offer lethal weapons for Ukraine in 2017. Statistics recently released by the U.S. Department of State showed that in just the past year, the U.S. provided more than $1 billion in security assistance to Ukraine.
Since the Russia-Ukraine conflict began, the U.S. military-industrial complex has been taking the war as a huge market and advertising place. As a result, Germany, Finland, Poland and some other European countries all declared to raise their defense budgets, and to acquire enormous weaponry from the U.S. The U.S. defense industry benefits the most from these purchases.
More than 60 years ago, former U.S. President Dwight Eisenhower had warned the U.S. public to be vigilant about the military-industrial complex’s detrimental effects on the U.S. However, this “beast” remains uncontrollable by these days. It is manipulating U.S. domestic politics, diplomacy and military policies even more unscrupulously.
Over the last two decades, defense contractors spent $2.5 billion on lobbying according to U.S.-based nonprofit organization OpenSecrets. The “revolving door” is also contributing to the development of the defense industry. From 2014 to 2019, over 1,000 senior officials and purchasers from the U.S. Department of Defense, including former U.S. Secretary of Defense James Mattis, had jumped to military enterprises that benefited enormously from these individuals’ relationships.
The military-industrial complex reveals why the U.S. is addicted to wars and why the country always ranks first in the world in terms of military spending. In the fiscal year 2022, the U.S. is expected to spend $782 billion on defense-related projects, $42 billion more from a year ago, and $52 billion higher than non-defense projects. Recently, the U.S. proposed a $813 billion budget for 2023.
Statistics showed that at least 1/3 of the U.S. military spending flows to arms dealers. According to a recent report released by the Stockholm International Peace Research Institute, the global transfers of major arms saw a slight drop of 4.6 percent between 2012-16 and 2017-21, while the United States boosted its exports by 14 percent, increasing its global share from 32 percent to 39 percent.
It is reasonable to say that wherever there is a war, there are U.S. weapons and traces of the U.S. military-industrial complex. Massive revenues would keep on flowing to military enterprises as long as wars continue.
The U.S. has long taken itself as a “beacon of democracy” and been hyping the false narratives of democracy versus authoritarianism in recent years. However, the stark contrast between the insufficient COVID-19 response fund in the country and the bloody wealth amassed by U.S. military enterprises, as well as the misdeeds done by the U.S. provoking wars and conflicts all over the world, have long tarnished the image of the U.S. as a democratic and pro-human rights country.
Blackmailed by the military-industrial complex and other interest groups, the U.S. has already been corroded by the thirst for money. It is bringing only turbulences to and jeopardizing the world and its own citizens.
(Zhong Sheng is a pen name often used by People’s Daily to express its views on foreign policy and international affairs.)