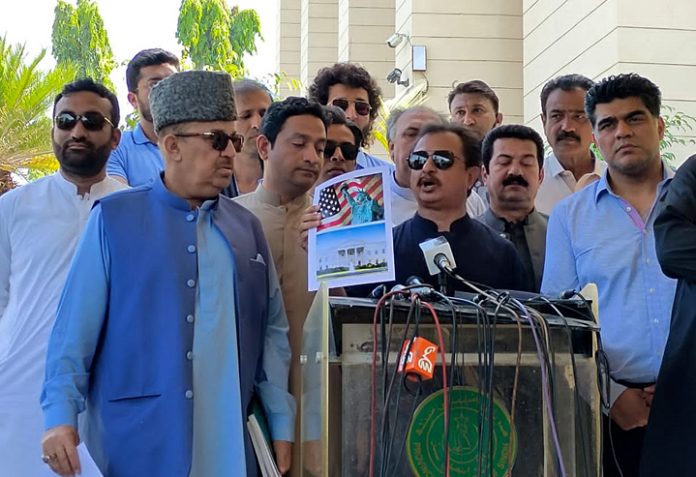 KARACHI: (Hannan Ali Narejo): Pakistan Tehreek Insaf Sindh Parliamentarians submitted a resolution condemning foreign interference in internal issues of Pakistan in Sindh Assembly secretariat on Wednesday. Leader of the Opposition in Sindh Assembly Haleem Adil Sheikh, PTI parliamentary leader in the assembly Khurram Sher Zaman, President PTI Karachi Bilal Abdul Gaffar and others submitted the resolution. They also staged a unique protest in Sindh Assembly by hanging effigy of friends of USA on main entrance of the assembly building. PTI Sindh Assembly members also chanted slogans ‘friends of USA are traitors of Pakistan’ at the occasion. The resolution termed the efforts of opposition parties aimed at overthrowing government with foreign intervention as serious violation of democratic norms and a very sensitive issue against integrity of the country. The PTI parliamentarians demanded that the august house should take action against the members who are part of the foreign guided conspiracy. PTI legislators speaking to media persons said that nation will not forgive the enemies of the homeland who were exposed before the nation. Haleem Adil Sheikh said that we are not against USA or any other country but conspiracies by foreign powers against the homeland are totally unacceptable to us and Pakistani nation will not remain silent against such conspiracies. Haleem Adi Sheikh alleged leadership of 3 major opposition parties of acting against the national interests and said that those three have gathered under the flag of USA and accepted White House as their centre of guidance. Today we have symbolically hanged effigy of the traitors of the home land, he added. “Today, the proud nation has got a brave leader Imran Khan who says Our Ka’bah is one and we bow our heads only before Almighty Allah,” Haleem Adil Sheikh said adding that on the other side Shahbaz Sharif called the Pakistanis as nation of beggars. He said that he wanted to correct Shahbaz that Pakistani nation is not beggar but a self-esteemed and proud nation. PTI’s war against traitors is in its final stages and truth will prevail, he maintained. Haleem Adil Sheikh said that the ugly faces of the MQM have been exposed and they will not get a single seat from Karachi or Hyderabad in upcoming elections. Khurram Sher Zaman said that Prime Minister Imran Khan has exposed all the traitors of Pakistan and the entire nation stand united against them who acted on foreign directives and bargained their conscience and national interests. Chief Justice of Pakistan should take sou moto notice against acts of treason and its perpetrators, he appealed adding that people of Pakistan awaiting judgement of the Supreme Court and Justice. He hoped that PTI in upcoming general elections will form government in Sindh.