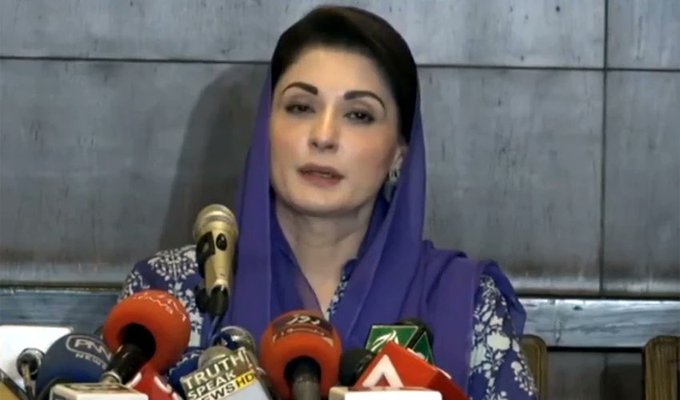 LAHORE: PML-N Vice President Maryam Nawaz Sharif on Wednesday lashed out at Prime Minister Imran Khan for using the platform of the National Security Committee (NSC) for his personal interests. Speaking during a press conference in Lahore, Maryam said that the PTI-led government, instead of talking about its achievements, resorted to using a “fake letter” to gain popular support.  Maryam was referring to the “threat letter” against the PTI government that — according to PM Imran Khan — was sent to Pakistan by a US diplomat.  She said the premier, in a bid to save his government, not only used a “fake letter” based on an “unfounded conspiracy”, but he also misused the platform of the NSC. “You have already read out the contents of the letter that you were trying to hide,” she said to the premier. “Then why is it that you are not showing the letter to anyone?” Maryam maintained that the premier is not showing the letter to anyone because there is nothing in the letter that he claimed. “You waved an empty paper during your jalsa,” she alleged, adding that there was no threat, to begin with. “This letter was drafted at the ministry of foreign affairs.” She said that once Imran Khan realised that since he had already let the cat out of the bag and wanted to hide his hoax, he sent the concerned ambassador to Brussels immediately so that no one could question him. “I ask, where is the ambassador today who had received the letter?” she said.  Lashing out at the premier for using the platform of the NSC, she said: “This was the Nationa Security Committee, not the ‘save Imran Khan’ committee.” She then addressed the security agencies of the country and urged them to issue a clarification regarding the letter.