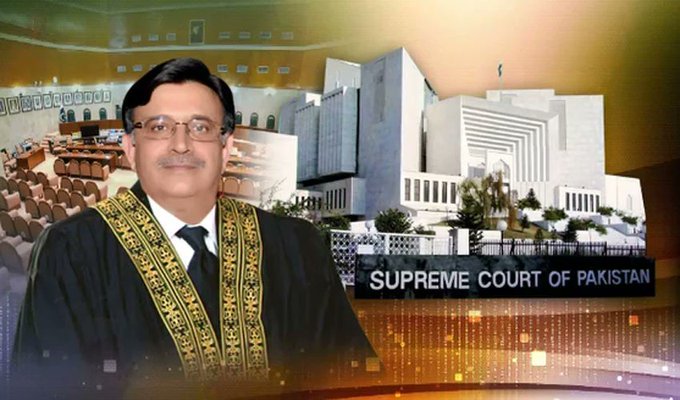 ISLAMABAD: The Chief Justice of Pakistan Umar Ata Bandial on Tuesday said that constitutional orders are above the rules of the national assembly. His remarks came during the hearing of the case filed against the “unconstitutional act” of the National Assembly Deputy Speaker Qasim Suri, who had disallowed the vote of no-confidence against Prime Minister Imran Khan on Sunday — a move that the Opposition said was a blatant violation of the Constitution.  A five-member larger bench of the apex court, headed by Justice Bandial and comprising Justice Muneeb Akhtar, Justice Aijazul Ahsan, Justice Mazhar Alam, and Justice Jamal Khan Mandokhel resumed the hearing this afternoon.  During the hearing, CJP Bandial directed NA speaker’s counsel Naeem Bokhari to present the minutes of the crucial NA session held on March 31 to debate the no-confidence motion against Prime Minister Imran Khan. The CJP also directed Bokhari to assist the court with the help of documents in the next hearing over the question of whether Suri had been given the authority to give the ruling or not. During the hearing, PML-N’s counsel Makhdoom Ali Khan said that the apex court can take an in-camera briefing from the premier intelligence agency chief. “SC does not practice interference in foreign policy or state policy affairs. It would be easier for us if the case is examined in the light of law and Constitution instead of policy issues,” CJP Bandial remarked in response to Khan’s suggestion. CJP remarked that the majority (20%) of the members were present in the NA when the no-confidence motion against PM Imran Khan was tabled. “The Constitutional right cannot be disregarded based on NA Rules.” At the outset of the hearing, PPP Senator Raza Rabbani walked to the rostrum to present his arguments. “This is a civilian coup. A stance was created through an alleged cable which is based on malafide intent,” the Senator said, adding that the no-confidence motion against the prime minister was tabled on March 28 but the NA session was adjourned. He maintained that Suri gave the ruling without putting the documents before the Parliament on Sunday. He argued that Rule 28 says the deputy speaker cannot give a ruling even if he has the authority. “Deputy speaker’s ruling is illegal […] no-trust motion cannot be rejected without voting on it,” Rabbani said. He further stated that the deputy speaker’s ruling doesn’t have constitutional security under Article 69. “Voting is mandatory within the given duration as per the Constitution”. PPP’s counsel said that the no-trust motion cannot be rejected under the Constitution. “It can be dismissed only when if those who submitted it take it back and the speaker can reject it only after voting is held on it.”