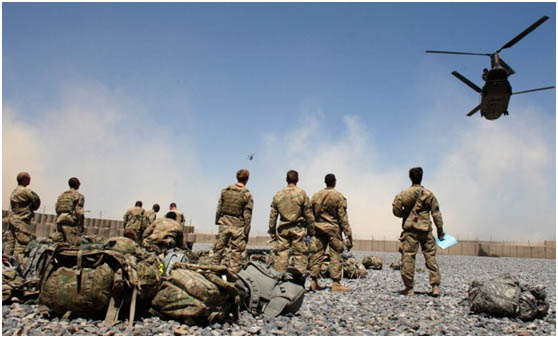 By Zhong Sheng, People’s Daily
A large demonstration was recently staged in Belgrade, capital of Serbia to protest the NATO bombing of Yugoslavia 23 years ago, which was executed without the U.N. Security Council approval and lasted for 78 days.
NATO’s war crime will never be forgotten by the Serbians, the Chinese, or the people in the rest of the world.
The U.S. and the NATO have waged a number of wars in the past decades, tearing countries and regions in different parts of the world apart. These wars demonstrated to all peace-loving people around the globe that the U.S., which is obsessed with Cold War mentality, as well as the U.S.-led NATO, is the biggest source of turbulences in the world.
Since the outbreak of the Ukraine crisis, the NATO has purported to be a guardian of peace, order and morality.. It positions itself as an ultimate decision-maker of international affairs, provokes confrontation, and threatens other countries to pick a side with sanctions, so as to reach its geostrategic goals.
However, it’s self-evident who initiated the most ferocious international security conflict in the post-Cold War era. An international political analyst believes that the conflict between Russia and Ukraine is a result of U.S. conspiracies and interference.
According to a political dignitary, the conflict could have been avoided if NATO had heeded the warnings from among its own leaders and officials over the years that its eastward expansion would increase regional instability..
The arbitrary decision of the U.S.-led NATO to move its so-called line of defense for collective security to the borders of Russia and Ukraine has directly turned down the opportunity to settle the Russia-Ukraine conflict through negotiations and led to a war between the two countries.
“We say we’re a peaceful nation. Why do our leaders always keep us at war?” That’s a very good question once raised by The Washington Post in one of its articles.
The U.S. always talks about peace, but it is indeed marching along the opposite path – wars. It’s a country that’s addicted to wars, and the American history is exactly a history of wars, which is a fact recognized by the international society. It is indicated by the photos posted by many people on social media of how their countries look like after U.S. bombings, as well as the miserable stories of themselves and their families in the wars launched by the U.S.
According to U.S. website War History Online, America has been at war 93 percent of the time since it was founded in 1776. After the World War II, Uncle Sam extended the tentacles of interference to the whole world, and became even more unscrupulous after the Cold War ended. A study by professor Monica Duffy Toft of international politics at Tufts University showed that the U.S. was engaged in 46 military interventions from 1948 to 1991, and the number more than quadrupled to 188 between 1992 and 2017. It’s fair to say that there was a trace of the country in almost every conflict that happened.
The U.S.-based magazine Foreign Policy once pointed out that the U.S. may feel an impulse to start a foreign war as long as it is deemed necessary, and as for the terrible humanitarian disasters resulting from these foreign wars, they will be borne by others.
American historian Alan Brinkley recorded in the book American History that during the Vietnam War, the U.S. military carpet-bombed Vietnamese villages, tore down buildings with bulldozers, and wiped out fields and forests with chemical agents, killing two million civilians and forced over three million refugees to flee their homes.
Furthermore, the U.S.-led NATO employed depleted uranium weapons, which are banned by international treaties, in bombing Yugoslavia, and caused long-term negative impacts on Serbia’s environment and people’s health. Following the 9/11 attacks, the U.S. successively launched wars in Afghanistan and Iraq, leading to regional turbulences and spillover of security threats.
According to Smithsonian, the official journal published by the Smithsonian Institution, the U.S. launched military actions in the name of “counter-terrorism” in around 40 percent of the countries on the globe after 2001. The Costs of War project at Brown University indicated that these so-called “counter-terrorism” wars have killed over 800,000 people and displaced more than 38 million. The refugee problem that has plagued Europe for years was indeed to a large extent caused by the warlike nature of the U.S.
The U.S. has devolved into a destroyer, and Washington is obsessed with armed forces rather than building peace, according to Stephen Wertheim, Deputy Director of Research and Policy at the Quincy Institute for Responsible Statecraft.
Repeatedly provoking conflicts and wars, showing indifference to peace talks, and even trying to protract the conflict, the U.S. has fully revealed that to protect global and regional peace and stability is never a priority in its strategy. What matters most to the country is its dominance in the international landscape, especially in the so-called “superpower game.”
The above point is well explained by the Ukraine crisis: what makes the U.S.-led NATO contain Russia is the White House’s intention to take dominance on the issue of European security.
We live in the 21st century, but the U.S. is still reluctant to abandon the outdated zero-sum games. The warlike U.S. is the largest destroyer of international order, and is in no position to play a guardian of peace.
(Zhong Sheng is a pen name often used by People’s Daily to express its views on foreign policy and international affairs.)