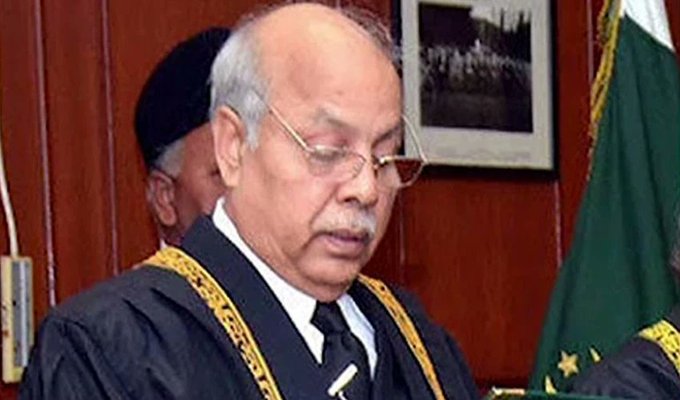 ISLAMABAD: The Core Committee of PTI has proposed the name of former chief justice Gulzar Ahmed as the caretaker prime minister, ex-information and law minister Fawad Chaudhry said Monday. The proposal of Gulzar — who laid down his robes on February 1, 2022 — comes after President Arif Alvi had sent letters to Prime Minister Imran Khan and Leader of the Opposition in the National Assembly Shahbaz Sharif to seek suggestions for the appointment of a caretaker prime minister. In case the two politicians can’t reach a consensus over one name within three days, each one of them will send two names to the parliamentarian committee responsible for appointing a caretaker prime minister. The eight-member parliamentary committee, comprising National Assembly and Senate members, with equal representation from the government and Opposition, will be formed by the NA speaker. PTI Chairman Imran Khan will continue as the prime minister despite being de-notified as the premier, till the appointment of a caretaker prime minister, the President’s Secretariat said in a presser issued after Sunday midnight. “Imran Ahmad Khan Niazi shall continue as Prime Minister till the appointment of caretaker Prime Minister under Article 224 A (4) of the Constitution of the Islamic Republic of Pakistan.” Imran Khan was de-notified as the prime minister of Pakistan earlier on Sunday after the dissolution of the National Assembly, Cabinet Division’s statement said.