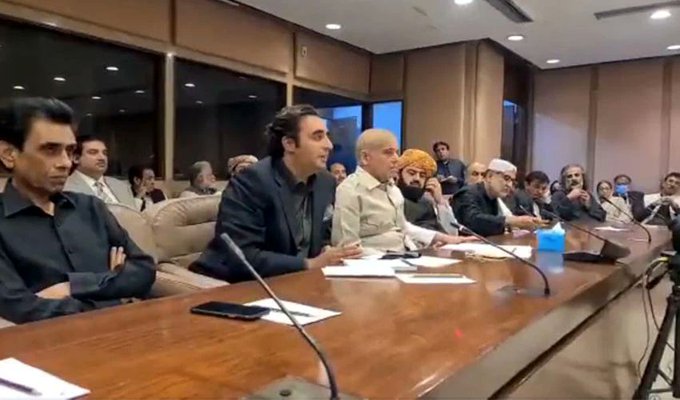 SUKKUR: PPP-Chairman Bilawal Bhutto-Zardari on Monday said that Naya Pakistan came to an end, but Imran Khan has no idea what just happened to him. Addressing a rally of his party workers in Sukkar, Bilawal said that despite his rule coming to an end, Imran Khan and his supporters are celebrating the occasion.  “Imran Khan has no idea what has just happened to him,” Bilawal said, adding that the Opposition has finally held the former, PTI-led government accountable.  He went on to say that throughout its tenure, the PTI government and the “selected” premier had badly hurt Pakistan.  “Imran Khan’s government made every institution of the country controversial,” Bilawal said. “State institutions belong to every Pakistani, not Imran Khan.” Speaking about the decision of the National Assembly’s deputy speaker to bar the Opposition from voting on the no-confidence motion against the prime minister Sunday, Bilawal said that instead of facing the competition, “Imran Khan chose to flee as he is a coward”.”He ran away from the no-confidence motion; he fled from the battlefield,” Bilawal maintained. “But while running, he has also violated the Consitution of the country.” The PPP chairman said that just to stay as the prime minister of the country for two weeks, Imran Khan violated the Constitution of the country. Speaking about the importance of the Constitution, Bilawal said that the Parliament and all state institutions exist because of the Constitution.  “Does the Constitution of Pakistan has no value?” he questioned. “Is it only a piece of paper? It seems like for Imran Khan, the Constitution is nothing but a piece of paper.” He said that the judiciary must endure that the Constitution of the country is protected. “If we want to make Pakistan stable, we will have to ensure that the Constitution is preserved and the rule of law prevails. “PPP jiyalas want this puppet of a prime minister to go home,” he said,  adding that his party had been insisting since February 27 that the no-confidence motion would succeed. “We asked him to face the vote of no-confidence, but this coward was not ready to do that. Our jiyalas will fight against all undemocratic elements in the country,” he said.  Bilawal also said that irrespective of the decision of the Supreme Court, Imran Niazi won’t be able to survive in the world of politics.