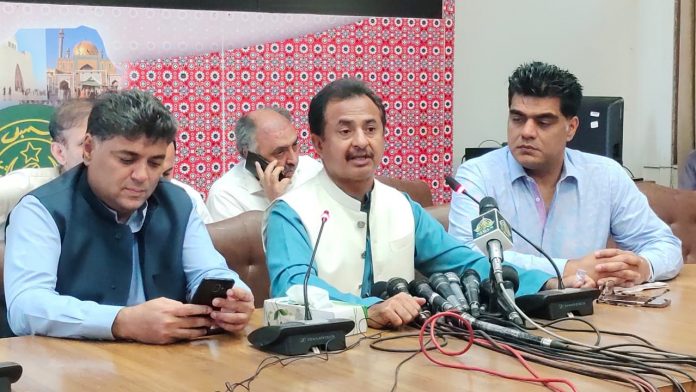 KARACHI: Pakistan Tahreek Insaf Sindh to bring out “Karvan-e-Wafa” rally on Firday to express solidarity with Prime Minister Imran Khan and support to his independent and sovereign foreign policy approach for Pakistan. The Karvan-e-Wafa will start from Mazar-e-Quaid and culminate at Teen Talwar after marching through different roads of the Metropolitan; it was decided in a meeting of PTI parliamentary party held here at Sindh Assembly Building with Leader of the opposition in Assembly, Haleem Adil Sheikh in chair. The meeting was attended by PTI parliamentary leader in Sindh Assembly Khurram Sher Zaman, president PTI Karachi Bilal Abdul Gaffar and other members of Sindh Assembly. Haleem Adil Sheikh while addressing a press conference said that it is battle of national honour and sovereignty of Pakistan and entire nation is joining the journey of Prime Minister Imran Khan which begun from ‘absolutely not’, People of Pakistan has realized that it is time to throw away chains of slavery and stand with cause of sovereign and independent Pakistan, he stated adding that the true faces of opposition parties had been exposed before the nation who always run state affairs on dictation from abroad. Pakistan is created in the name of Kalma Tayyaba and now Allah has blessed the country with the courageous leader like Imran Khan who refused to accept dictation of foreign powers which in past had been involved in power games, drone attacks and bomb blasts in the country, Haleem Adil Sheikh said. Not allowing Pakistani air bases to foreign powers, raising issues of Islamophobia, sanctity of Prophet Muhammad s.a.w and publication of derogatory caricatures at the international fora are the crimes of Prime Minister Imran Khan, he said adding that Imran Khan has risen as leader of all the Muslims.