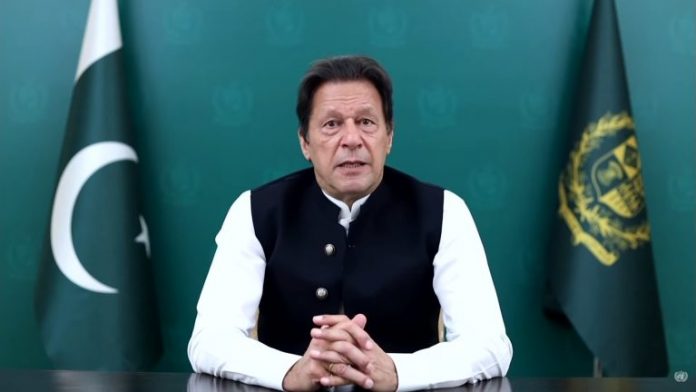 ISLAMABAD:Prime Minister Imran Khan Thursday, while resolving to fight the conspiracy against his government, said the nation would never forgive and forget the conspirators as well as their supporters. “On Sunday, there is voting (on a no-confidence motion). The country’s fate is about to be decided on Sunday… The nation will decide where they want the country lead to,” the prime minister said in his address to the nation broadcast live. He said the people would always remember those who would be committing any treachery on Sunday as they would not buy their argument so easily. The prime minister addressed the nation hours after he chaired the meeting of the National Security Committee, which called the formal communication of a foreign country’s official “blatant interference” in Pakistan’s internal affairs and also decided to issue a demarche to that country. “I will fight if you think this conspiracy will succeed. Future generations will not forgive them. They should not have any misconceptions. It will make no difference to me as I live in my own house, bear my own expenses, and have no family member in politics,” he remarked. He told the nation that on March 7, the government received a message from that country through Pakistan’s ambassador there, which said that they would pardon Pakistan’s all misgivings if Imran Khan was ousted. If happened otherwise, Pakistan would have to face difficulties. “This (message) is against the nation,” he said, adding the message coming before the vote of confidence showed that the political opponents were in contact with that country. “Is this our worth?…We are creeping like snails,” he remarked. The prime minister said the conspiracy was being hatched through three stooges in Pakistan. They wanted to oust Imran Khan and it would also be fine for that country, he added. He questioned the nation whether they would allow the one into power facing NAB (National Accountability Bureau) cases for corruption of billions of rupees, and an absconder whose corruption tales were also highlighted by the Western media, including the BBC. He said out of nothing, the said foreign country expressed its concerns over his Russian visit which he had done after thorough consultation with the military leadership, Foreign Office and think tanks. He said through their intelligence reports, the foreign countries had all the information about him as well as the opposition leaders and their benami properties and bank accounts abroad. He said the leaders, who were now beloved by the said foreign country, never condemned 400 drone attacks by the United States during their tenures killing innocent people. Referring to the Wikileaks disclosures, he said JUI-F chief Maulana Fazlur Rehman had once offered to serve the US interests if he was given power. He said instead of condemning Narendra Modi for calling that time Army Chief General Raheel Sharif a terrorist, he said Nawaz Sharif used to secretly meet him. He said instead of condemning the drone attacks, the then president Asif Zardari told the US that the collateral damage made no different to him. He said Shehbaz Sharif had opposed his “Absolutely Not” stance to join the US-led war anymore, said his government was pursuing an independent foreign policy. “Our public representatives are on sale. This is the trade of loyalties. This is the trade of country and its sovereignty. What lesson are we giving to our youth? No one will ever call them ideological. Everyone knows them,” the prime minister remarked..:The prime minister said Pakistan was at a defining moment, it had to choose from two paths. Calling Quaid-e-Azam Muhammad Ali Jinnah a great politician and lawyer, he said before he came into politics, he had everything; popularity, money. “Even today I do not need anything from others and I am thankful to Allah for His blessings.” Imran Khan said he was among the first generation, which grew up in an independent nation while his parents were born in an enslaved country. He said self-respect was the sign of an independent nation and Pakistan had to be built according to vthe ision of Quaid-e-Azam and Allama Muhammad Iqbal. Its aim was to become an Islamic welfare state on the model of Riyasat-e-Madina founded on the principles of justice, humanity and self-respect. “Humans are the best of creations. Humans move ahead and resist against difficulties. I want that the youth should learn from the life and qualities of Prophet Muhammad (Peace Be Upon Him).