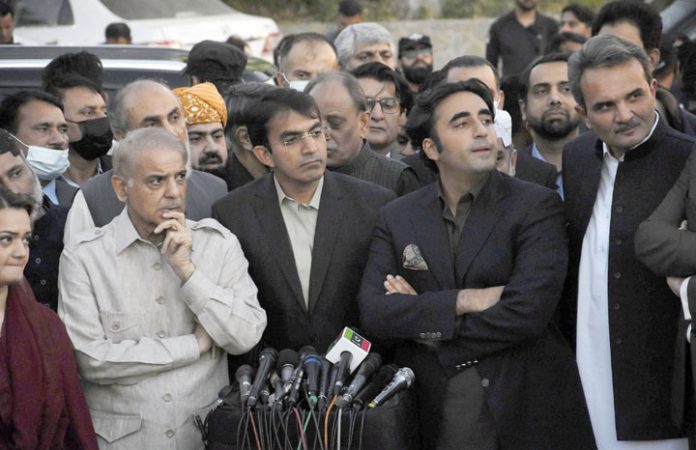 ISLAMABAD: Responding to televised address to the nation, the Opposition on Thursday berated Prime Minister Imran Khan for not fulfilling a single promise and “enslaving” the country to foreign institutions. The Opposition leaders’ comments came shortly after the premier addressed the nation, where he claimed the Opposition was acceptable to foreign powers as they were “corrupt”, but he is not bearable to them. PPP Chairman Bilawal Bhutto-Zardari said: “He (prime minister) has lost and his government’s time is up.” Bilawal, referring to the premier, said he does not listen to “the former prime minister’s” speeches as now, even the people are aware of his “lies.” The PPP chairman said the prime minister has not fulfilled a single promise during his tenure and enslaved the nation to the International Monetary Fund (IMF). The lawmaker from Larkana blamed PM Imran Khan for sabotaging the China-Pakistan Economic Corridor (CPEC).  “In his three years, he pushed the country towards destruction instead of bringing about the promised change (tabdeeli).” The PPP chairman said the prime minister has witnessed his defeat and knows that there is no way to escape — as the voting on the no-confidence motion against him takes place four days from now, on Sunday. Bilawal, talking about today’s National Assembly session where the Opposition’s count stood at 175, said: “We have proven that the prime minister has lost majority.”
Moving on, Bilawal said the PPP has “never compromised” on Pakistan’s foreign policy, as it not only condemned the drone attacks during the “war on terror”, but it also stopped the NATO supply in Pakistan. Later, three top PML-N leaders — Khawaja Asif, Shahid Khaqan Abbasi and Khawaja Saad Rafique — gave their party’s response to the PM’s address as well. Former foreign minister Khawaja Asif shared that the “letter gate” controversy was being turned into a political issue. Asif claimed that the foreign funding case against the PTI showed that “non-Muslims” used to fund him. He added that India and Israel used to fund the former prime minister. “Now he is using the religion card,” said Asif.