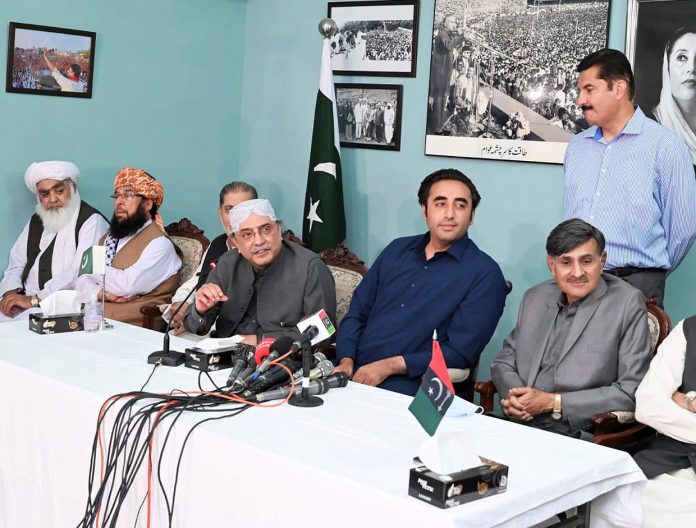 ISLAMABAD: PPP Co-chairman Asif Ali Zardari has been taken by surprise after PML-Q decided to support Prime Minister Imran Khan amid the no-confidence motion. Flanked by Opposition leaders, Zardari — while addressing a press conference — said that political paths never cease to exist but noted that a “sudden” change of plans shifted PML-Q’s position. The press conference was held to announce that independent MNA from Balochistan Mohammad Aslam Bhootani has joined the Opposition and parted ways with the PTI at the most crucial junctures of PM Imran Khan’s career.  “At 12 in the night, he comes to congratulate me and then later goes elsewhere,” Zardari said after the PML-Q accepted PM Imran Khan’s offer to nominate Punjab Assembly Speaker Pervaiz Elahi as the new chief minister of the province following CM Usman Buzdar’s resignation from office. The National Assembly will start debating the motion against the premier on Thursday, March 31, as PM Imran Khan is trying to steady the ship ahead of it by wooing the government’s allies. Zardari said he had approached Elahi keeping in mind the political situation of the country — and with the same intention, he had asked other lawmakers to support the no-confidence motion against the premier.