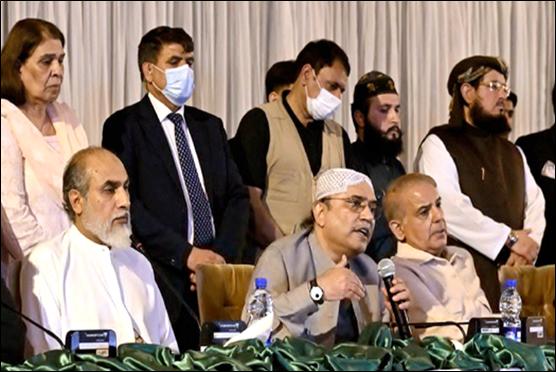 ISLAMABAD: BAP Parliamentary Leader Khalid Magsi said Monday that his party would support the Opposition’s no-confidence motion against Prime Minister Imran Khan. “We want the country to be handled in anew […] we want the issues to be resolved,” the BAP leader, whose party has four MNAs, said while addressing a press conference alongside Opposition’s bigwigs — PML-N President Shahbaz Sharif, PDM chief Fazlur Rehman, PPP Co-chairman Asif Ali Zardari, and PPP Chairman Bilawal Bhutto-Zardari. The setback come only a day after Special Assistant to PM (SAPM) on Reconciliation and Harmony in Balochistan and Jamhoori Watan Party leader Shah­zain Bugti announced to part ways with the government and side with the Opposition. Rifts have also emerged in the PML-Q as Federal Minister for Housing and Works Tariq Bashir Cheema has resigned from office and decided to vote in favour of the no-confidence motion against PM Imran Khan. The government seems to be cornered as after the JWP, BAP, and Cheema’s announcements, they appear to have lost six votes — at a time when every vote counts. However, BAP leader and Minister for Defence Production Zubaida Jalal has not parted ways with the government and will vote against the no-confidence motion. Meanwhile, Opposition leaders — Fazl, Shahbaz, Zardari, and Bilawal — thanked the BAP leader to announce support for the no-trust motion. “We will ensure Balochistan’s development,” the leaders vowed. For his part, BNP-M chief Akhtar Mengal said the incumbent government has ignored Balochistan and did not pay attention to the province’s issues. “Instead of paying attention to our issues, they made fun of us,” he said. Shahbaz, talking to journalists, said the government, which will be formed, after PM Imran Khan’s ouster would focus on the development of Balochistan. Taking over the press conference, Zardari said the “atmosphere” of the no-confidence motion was prevailing and the joint Opposition would make sure that Shahbaz becomes the prime minister “soon”.”Balochistan has been kind towards me, we will also try to bring a minister from Balochistan [in the Centre],” the ex-president said.