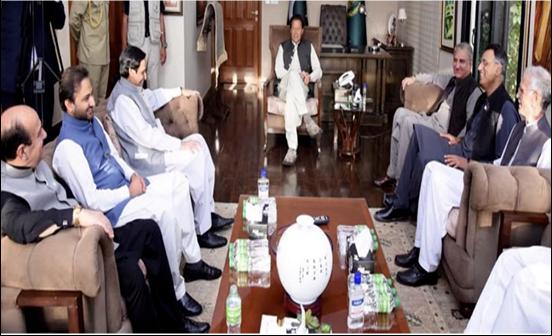 ISLAMABAD:The Chief Minister of Punjab Sardar Usman Buzdar has tendered his resignation on Monday after the joint Opposition submitted a no-confidence motion against him in the Punjab Assembly earlier today. According to Minister of State for Information and Broadcasting Farrukh Habib, Prime Minister Imran Khan has nominated PML-Q’s Chaudhry Pervaiz Elahi for the post. PML-Q’s leader Moonis Elahi confirmed that the post has been accepted by Elahi. “Chaudhry Pervaiz Elahi meets Prime Minister Imran Khan. All issues were settled in the meeting. PML-Q expresses confidence in PM and announces support. Chief Minister Usman Bazdar tenders his resignation to PM. Prime Minister Imran Khan has decided to nominate Chaudhry Pervaiz Elahi as the new Chief Minister of Punjab,” Habib wrote on Twitter. On Monday, the joint Opposition had submitted a no-confidence motion against Chief Minister Punjab Usman Buzdar in the Punjab Assembly, citing that they had been dissatisfied with his performance.  The development had come in the wake of the Opposition’s no-confidence motion and increasing pressure within the PTI to remove the incumbent chief minister. A total of 126 lawmakers — including Rana Mashood, Ramzan Siddique, Malik Ahmed and Mian Naseer — from the Opposition parties had signed the no-confidence motion against Buzdar, said PML-N’s Rana Mashood, adding that 119 members had signed the requisition for a session.
“CM Usman Bazdar has lost the confidence of the majority of the House,” read the resolution.  It said that the chief minister is not running the affairs of Punjab as per the Constitution and he has ruined the democratic norms in the province. On the other hand, Special Assistant to PM on Political Communication (SAPM) Shahbaz Gill claimed that the PML-Q — which is an important ally of the government in the Centre and Punjab — will support PM Imran Khan in face of the no-confidence motion against him, which the Opposition tabled in the National Assembly today. “PTI will support Chaudhry Pervaiz Elahi as a candidate for the chief minister [in Punjab] and the PML-Q has announced to support PM amid the no-confidence motion,” Gill wrote on Twitter.