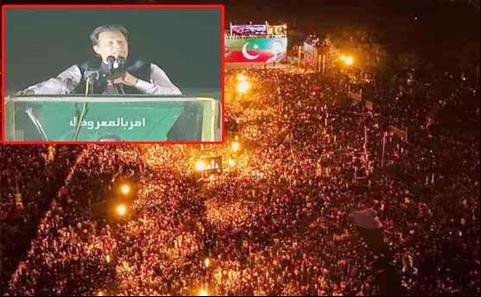 ISLAMABAD: Prime Minister Imran Khan Sunday laid bare the conspiracy being hatched against the country to target the independent foreign policy being pursued by his government and the “funding” made to the joint opposition alliance to dislodge a democratically elected government. “We will not accept slavery of anyone- we can be friends with all, but will not be slaves to anyone.” “We will never compromise on our national interests,” Imran Khan told a mammoth gathering here at the Parade ground, attended by people from across the country, on his call to stand up with what is right and up against the evil – ‘amr bil maroof’. Addressing a charged crowd, including a large number of women, Imran Khan said the recent revival of the joint opposition alliance – Pakistan Democratic Movement (PDM) was in fact funded by “certain” foreign powers with the sole objective of removing a democratically elected government, as it dared to pursue its national interests and follow an independent foreign policy. “I have never bowed before anyone, except Allah, and will never let my nation bow to anyone,” Imran Khan said as the huge crowd endorsed his resolve. The Prime Minister disclosed that for the past several months’ efforts were being made to influence Pakistan’s foreign policy. Without naming any country or foreign power.Imran Khan read out a “carefully drafted statement” and said Pakistan desires to be friends with all. Prime Minister Imran Khan said “efforts were being made from abroad to influence our Foreign Policy, for the past few months,” and said Foreign Minister Shah Mehmood Qureshi fully knows about it. He said funding from foreign countries was being funnelled into Pakistan, to conspire against a sitting government. “We know exactly well from where [foreign] influence is being exerted. We will not compromise on our national interests. And I am not levelling any baseless allegations. I have this letter here with me that proves what I have said.”