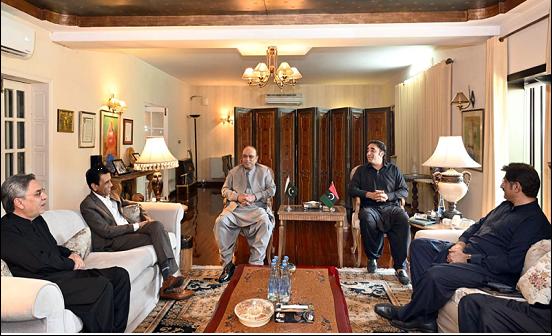 ISLAMABAD: MQM-P leader Aminul Haq on Thursday said consultations are still ongoing with the government and the Opposition, as the latter woos the government’s allies to oust Prime Minister Imran Khan ahead of the voting on the no-confidence motion. leader said that MQM-P is a separate party and makes its own decisions when asked if all the allies would announce a  final decision together. Meanwhile, sharing a picture of the meeting on its official Twitter handle, the MQM-P revealed that during the meeting, Khalid Maqbool Siddiqui, Aamir Khan, Aminul Haq, Wasim Akhtar, and Javed Hanif were present. Meanwhile, PPP’s Asif Ali-Zardari, Bilawal Bhutto-Zardari and Murad Ali Shah were also present during the meeting. A day earlier, the MQM-P had again suggested to the ruling PTI that it should bring changes in the Prime Minister’s Office to end the ongoing political crisis and the tense political environment in the country,  “PM Imran Khan should nominate another leader from the PTI in his place so that the coalition parties can take a positive decision,” the MQM-P told a delegation of the ruling party during a meeting at the Parliament Lodges. The PTI’s leaders met with the MQM-P lawmakers yesterday night, the sources added The government’s delegation comprised National Assembly Speaker Asad Qaiser, Defence Minister Pervez Khattak and Federal Minister for Planning and Development Asad Umar while Siddiqui was leading the MQM-P side.