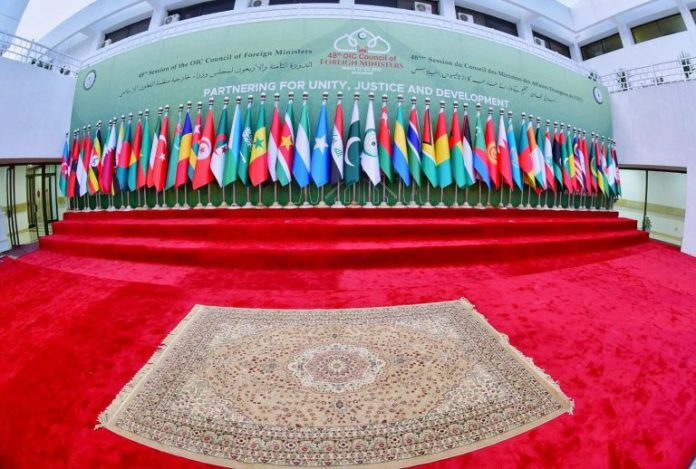 ISLAMABAD: The Council of the Foreign Ministers of the Organization of Islamic Cooperation (OIC) will meet today at the inaugural session of the 48th session being hosted by Pakistan. Prime Minister Imran Khan in his keynote address at the inaugural session will highlight Pakistan’s role and contribution towards OIC and deliberate on the challenges faced by the Muslim world. Foreign Minister Shah Mahmood Qureshi will deliver a statement on the occasion as after the election of bureau members, as the OIC chair will be handed over to Pakistan. Foreign ministers of Saudi Arabia Prince Faisal bin Farhan Al-Saud, Secretary-General OIC Hissein Brahim Taha, President Islamic Development Bank Dr Muhammad Suleiman Al-Jasser, Chinese State Councilor, and foreign minister Wangi Yi will address the session. The video message of Secretary-General of the United Nations Antonio Guterres will be shown on the occasion. The theme of the session is ‘Building Partnerships for Unity, Justice, and Development,’ which will be held at the Parliament House. More than 100 resolutions will be considered during the two-day session. The session coincides with the 75th anniversary celebrations of Pakistan’s independence. On March 23, the visiting foreign ministers will visit the Pakistan Day parade venue and witness the professional capability of Pakistan’s armed forces and the traditional floats of all the provinces, reflecting the national unity.