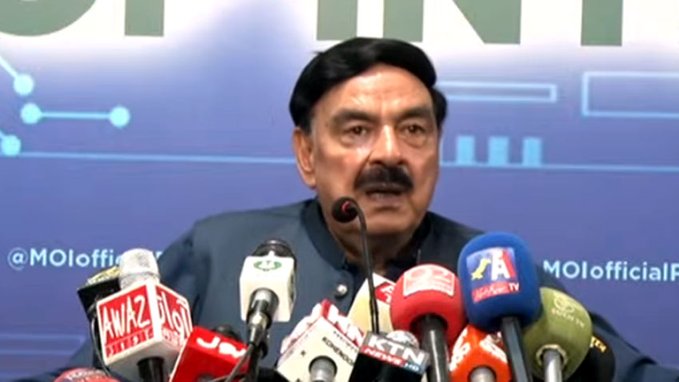 ISLAMABAD,: Inviting the dissident MNAs of Pakistan Tehreek-e-Insaf (PTI) to come back, Minister for Interior Sheikh Rashid Ahmad Friday reiterated the ministry would not carry out any raid at the Sindh House despite the fact that it was made a stock exchange by the opposition.

Addressing a press conference here, he assured the dissident PTI MNAs that no one would say anything to them. “I appeal to them to return to the party,” he said.

The minister asked them to consult with their constituencies and their voters on what they thought about their decision. They (MNAs) would regret their decision, if they did not return, he added.

He said the government had received information about the presence of only about five to six PTI members at the Sindh House but in videos 9-12 members were shown.

The minister asked the estranged members as well as the allied parties to stand by Imran Khan at this critical juncture.

The international investors did not want independent foreign policy in Pakistan, he remarked.

He said 2000 personnel of Rangers and 1000 of Frontier Constabulary were called for deployment in the capital for ensuring security.

Rashid said the opposition would hold its rally on March 25 while Prime Minister Imran Khan would address a historic rally of PTI on March 27 at D-Chowk. As many as four public holidays have already announced from March 21 to 24 in view of OIC Foreign Minister Summit and Pakistan Day parade.

“We want to mutually decide these matters including the routes for rallies. There is no room for conflict in democracy,” he said.

The minister said directives were issued to the Deputy Commissioner Islamabad to decide mutually routes of both the rallies.

Rashid said bringing a no-confidence motion against the prime minister was the opposition’s right and nobody would face security issues while voting on it.

He said he had presented a summary to the prime minister for imposing emergency and governor rule in Sindh earlier in the day but no decision had been made on the suggestion so far. It was his personal view point that governor’s rule should be imposed in Sindh as openly buying and selling of lawmakers was carried out at the Sindh House, he added.