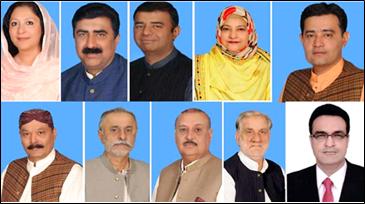 KARACHI: Ahead of the no-confidence motion against Prime Minister Imran Khan, around 24 members of the PTI are currently staying at the Sindh House, a move that has plunged the country into political chaos. PTI’s disgruntled member of the National Assembly Raja Riaz claimed on Wednesday that if PM Imran Khan assures all MNAs that no action will be taken against those who decide to vote against him on the day of the no-confidence motion, they are ready to go back to the Parliament Lodges., PTI MNAs Malik Nawab Sher Waseer and Riaz said that around 24 PTI members have been staying in the Sindh House right now. Riaz further said that many other ministers are ready to come here, however, “PML-N is unable to accommodate all the members.” Riaz, who is a member of the Jahangir Tareen group, told journalist Hamid Mir that the disgruntled members would vote for the no-confidence motion against PM Imran Khan in “accordance with their conscience.” Waseer also said he would not contest the next general elections on a PTI ticket. While Riaz claimed that 24 members are staying in the Sindh House, Hamid Mir said that according to his counting, “20 PTI MNAs are present in Sindh House.” The senior journalist said that several disgruntled leaders are avoiding the camera, however, he said that all of them have confirmed that the reason for staying at the Sindh House is out of fear. “The disgruntled members fear that the government will take action against them similar to the March 10 raid by police on the Parliament Lodges,” Mir confirmed. According to sources, PTI members who are currently staying at the Sindh House include Raja Riaz, Nawab Sher Waseer, Rana Qasim Noon, Ghaffar Wattoo, Noor Alam Khan, Riaz Mazari, Basit Bukhari, Khawaja Sheraz, Ahmad Hasan Dehar, Nuzhat Pathan, Ramesh Kumar, and Wajeeha Qamar.  Sources added that a list containing the names of the MNAs staying at the Sindh House has been sent to PM Imran Khan. Meanwhile, MNA Ramesh Kumar, who is also staying at the Sindh House, has announced that he has parted ways with the PTI. , Kumar has claimed that three federal ministers have quit the ruling PTI. He, however, did not reveal the names of the ministers.