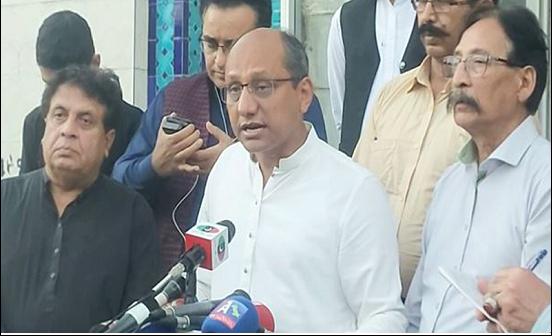 ISLAMABAD: Provincial Information Minister Saeed Ghani on Thursday claimed that “Interior Minister Sheikh Rasheed and Information Minister Fawad Chaudhry will cast their vote against Prime Minister Imran Khan on the day of voting on the no-confidence motion.” Speaking to journalists in Islamabad, Ghani said that the PTI doesn’t know how to deal with political leaders, adding that all PTI leaders who are threatening the members of the Opposition should realise that “Niazi government’s time is over.” The provincial minister claimed that several members will vote against PM Khan on the day of the no-confidence motion. “PTI’s Aamir Liaquat has not made any claims in support of Imran Khan,” he said, adding that Liaquat and many other members are not taking sides because they are being fearful of the government. He further mentioned that many MNAs inside the PTI’s camp are “not supporting their party.” Following the controversy regarding members of the National Assembly staying in the Sindh House, Islamabad, Ghani warned the PTI government that if it tries to stop Opposition members in Islamabad, the Opposition will also stop PTI’s members in Karachi. He said that the members of the government will be “treated exactly how they treat members of the Opposition.”
“If you are planning to gather people here in Sindh, please be aware that we will also gather people here and will forcefully send our MNAs to the assembly,” he said, adding that “this attitude will not be tolerated.” “Imran Khan, your time to rule the country has come to an end as you are no longer needed. Therefore, you should accept this fact as soon as possible,” the minister reiterated.