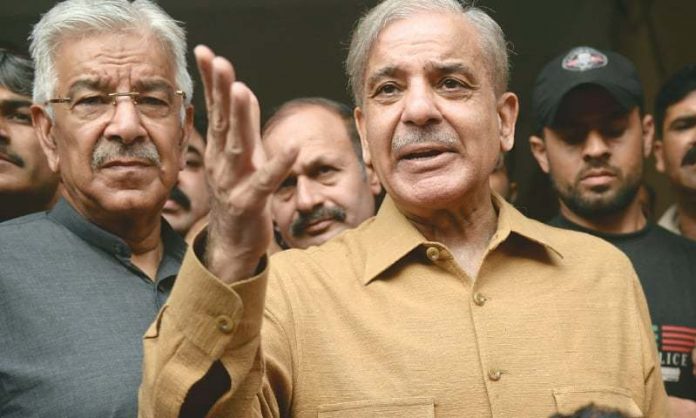 ISLAMABAD: Opposition Leader in the National Assembly and PML-N President Shahbaz Sharif Wednesday floated the idea of forming a national government in which PTI has no participation. “The national government — sans PTI — should be formed for the next five years,” the PML-N president said during an interview in TV”. Mentioning that it was his personal idea of forming such a government, Shahbaz said that the new leadership that comes into power should work with all the dedication so as to set a benchmark. “And then we can see what happens,” he told senior journalist and anchorperson Hamid Mir. With the National Assembly session for voting on the no-confidence motion against PM Imran Khan just weeks away, the government is trying to woo its allies for supporting it during the voting. The Opposition is also attempting to cajole the PTI allies and seeking to break the government alliance in the lower house — by holding back-to-back meetings with them. PM Imran Khan has said that he is ready for everything that the Opposition plans to throw his way — but he has also intensified meetings with allies ahead of the no-trust motion session. Both — the government and the Opposition — are set to hold massive rallies in Islamabad before the crucial session — with the government’s gathering scheduled for March 27, while the Opposition’s “long march” will take place after March 25, once the Organisation of Islamic Cooperation’s (OIC) session ends. It is noteworthy that the three allies have 17 representatives in the National Assembly. If these parties join the Opposition, the PTI government’s strength will fall to 162 from 179, and the total number of MNAs in the unified opposition would rise to 179.
To pass the no-trust motion, the Opposition needed the backing of 172 MNAs. The NA currently has a total membership of 341 members, with one seat empty. The ruling coalition now has 179 MNAs in favour, while the Opposition has 162 MNAs in the lower house of parliament. The Opposition required the backing of ten more MNAs to dislodge the Imran Khan government.