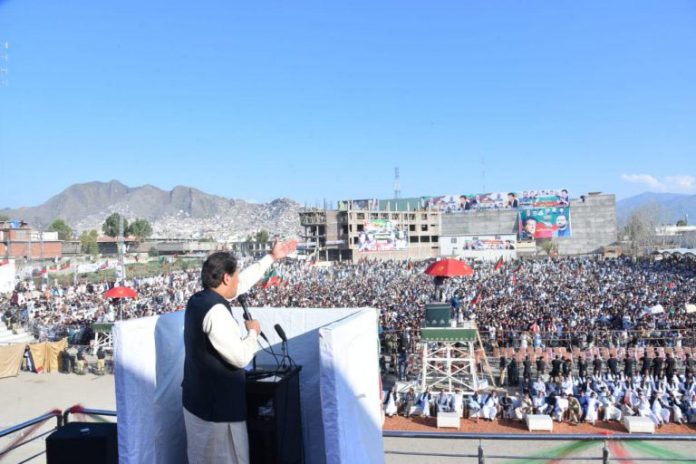 SWAT:Prime Minister Imran Khan said on Wednesday that Islamabad’s Sindh House is the hub of horse trading where conscience of lawmakers were being traded. Addressing a rally in Swat on Wednesday, he said that the political opponents fear landing in jail if Imran Khan stayed in power for some more time. The prime minister while declaring the next few days important said that he will hunt down all his opponents. The PM said that “bags of notes” were being used from Sindh House in Islamabad for horse trading and buying conscience of the members of parliament like Nawaz Sharif [former prime minister] did in Changa Manga in the past. “Does the Constitution allow horse trading? Does any democracy in the world allow this? Is this practice allowed in UK, the democracy to which we follow?” he remarked while posing a question to the Election Commission of Pakistan. He said that the opposition parties were doing all this to protect their corruption. “They know that if Imran Khan remains in power, all of them would be in jails”, he remarked. Imran Khan said that he was grateful for the warm welcome extended to him by the Tigers of Swat. He urged the charged crowd to vote for bat in the second phase of the local body elections in the province. He said, “I woke up this morning and thanked Allah. Today is the happiest day for me as I have been trying for three years to get the resolution against Islamophobia pass in the United Nations.” He said Pakistan s resolution was presented jointly by 57 countries and he has been receiving congratulatory messages from Muslim countries all over the world. The premier said the incumbent government struggled for three years and at last succeeded in passing a landmark resolution at the United Nations, designating March 15 as “International Day to Combat Islamophobia.” He said the Muslim community in the west suffered the most from Islamophobia. PM Imran said terrorists have no religion and Islam has nothing to do with terrorism but the west has always linked Islam with terrorism. Taking a jibe at Pakistan Democratic Movement (PDM) chairman and JUI-F Chief, Imran Khan said Maulana Fazlur Rehman did nothing in the service of Islam in his 30 years of politics. Criticizing the fascist Indian regime, Imran Khan said the Karnatak court has banned wearing of head scarf for women which is the worst example of Islamophobia. He said the PTI government has steered the country out of difficult times including corona and economic instability. Imran Khan said the whole world has acknowledged our strategy during the Covid pandemic. He said the government has achieved record production of wheat, maize and rice besides record revenue generation through tax reforms.