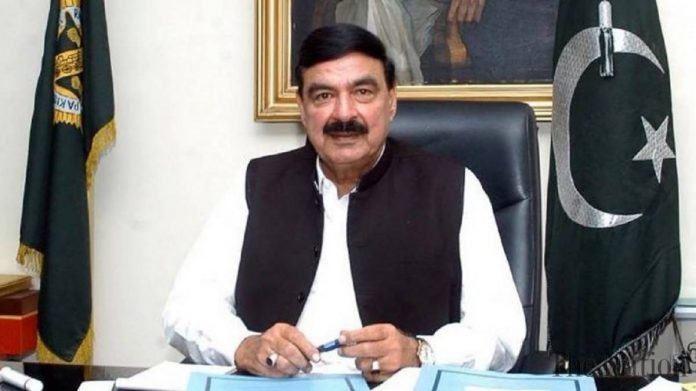 LAHORE: Interior Minister Sheikh Rasheed Ahmad on Tuesday said that “the umpire stands with Pakistan and those who care for Pakistan are convincing them to resolve the matters through understanding.” “They are the supporters of democracy and they are thinking about Pakistan. They stand with no one but Pakistan,” Rasheed said while addressing a press conference in Lahore. He said the Opposition created confusion in the last four years and now it’s just one year left in the next general elections. “Opposition ka upar wala khana khali hai (Opposition lacks wisdom) […] but all these imperialist maggots would meet their end after reaching D-Chowk,” he said. The minister went on to say that the government will try to control the situation at D-Chowk and if it couldn’t, then it is up to the Opposition. However, he warned that the Opposition would face a loss if any incident takes place at the D-Chowk. “Imran Khan’s rule is not going anywhere. Four years of his tenure [as the prime minister] have been completed and he will complete the remaining one year by hook or by crook,” Rasheed said. Commenting on the political situation in Punjab, the minister said that he is not aware of provincial politics as he doesn’t do politics there. Moreover, Rasheed said that the last week of March would be important for the country.  “Maulana Fazlur Rehman should understand that the politics of Maula Jatt won’t work, therefore, he should come to Islamabad on March 23 and the government will provide him complete security,” he said, adding that he himself would be responsible if anyone is stopped from proceeding to the D-Chowk. He said that the Opposition doesn’t have enough numbers and bids are being made in the market, adding that “sell-outs” only face humiliation, as they can never succeed. Urging the Opposition to rethink their moves he said: “Please don’t push the country towards anarchy and the consequences will be irreversible,” Rasheed said.