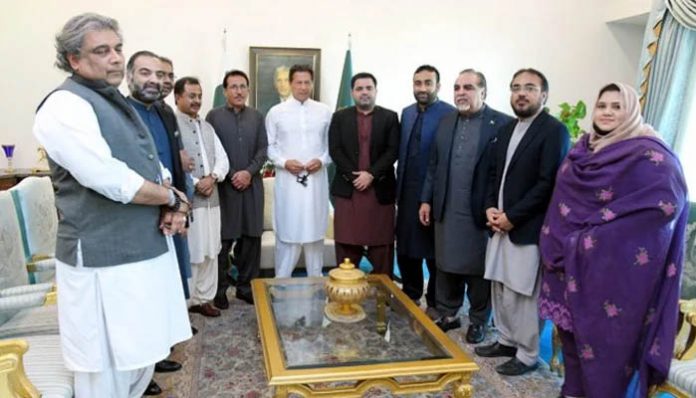 ISLAMABAD: Governor Sindh Imran Ismail and a delegation of members of parliament from the province called on Prime Minister Imran Khan on Tuesday and expressed their “complete confidence” in his leadership. Senator Saifullah Abro, MNAs Faheem Khan, Attaullah, and Sindh MPAs Haleem Adil Shaikh, Ali Junejo, Syed Afandi, Sidra Taimur, and Riaz Ahmed were in the delegation that called PM Imran. Minister for Maritime Affairs Ali Zaidi was also present during the meeting. Political issues were discussed during the meeting, as the clock ticks on the Opposition’s no-confidence motion — for which a session is expected to take place in the last week this month. The government’s key ally in the Centre, the Grand Democratic Alliance (GDA), Monday assured PM Imran Khan of complete support ahead of the no-trust motion, while other allies — BAP, MQM-P, and PML-Q — are still indecisive. Several MNAs also called on PM Imran Khan in the federal capital and “expressed full confidence” in his leadership. MNAs Lal Chand, Shanila Ruth, J Prakash, Jamshed Thomas, Chaudhry Muhammad Adnan, Ejaz Khan Jazi, Sahibzada Sibghatullah, Mehboob Shah, Muhammad Bashir Khan, and Minister for States and Frontier Regions (SAFRON) Sahibzada Mehboob Sultan called on the premier. During various meetings, the progress on development projects and political matters in the respective constituencies came under discussion. The prime minister said the “popularity of PTI could be measured from the large turnout” at the recent public gatherings. He urged the MNAs to intensify public meetings in their constituencies. He said the PTI government always worked for the rule of law and the “welfare of the poor”.PM Imran mentioned that the government had taken tough decisions to keep the economy stable, adding that it also bears the burden of heavy subsidies to provide relief to the poor.