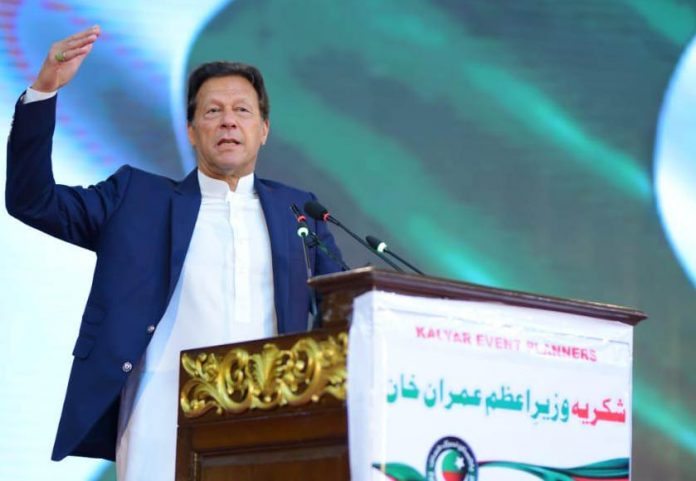 ISLAMABAD: Prime Minister Imran Khan said Tuesday the entire nation was ready to go down with him rather than supporting the “three stooges”, as he slammed the Opposition amid rising political tensions due to the no-confidence motion. In his address to the convention of overseas Pakistanis in Islamabad, the prime minister said: “When the people saw the faces of the three stooges — PML-N President Shahbaz Sharif, Pakistan Democratic Movement (PDM) chief Maulana Fazlur Rehman, and PPP Co-chairman Asif Ali Zardari — they decided against supporting them and expressed their desire to go down with [me].” The prime minister thanked the Opposition for moving the no-confidence motion as through this, his party had strengthened, with people all-geared up for the March 27 rally — which is expected to take place at D-Chowk just a day before the National Assembly votes on the no-trust motion. PM Imran Khan also thanked the Opposition “wholeheartedly” as they had made people forget the rates of potatoes and tomatoes. The premier said he and his team were always trying to figure out ways to reduce the impact of inflation on the masses, but after the Opposition’s no-confidence motion, the focus shifted to mainstream politics rather than inflation. PM Imran Khan said neither of the three parties — PPP, PML-N, and JUI-F — worked at the grass-root levels and did “actual politics”, while the PTI struggled for more than two decades to get to where it is today. “They cannot defeat us.” “Nawaz became the chief minister through General Jilani; Shahbaz, who used to give bribes to get his work done, has now become; Zardari became the president by ‘showing’ a fake paper; Fazl has been selling the religion from the last 30 years,” he said. PM Imran Khan said the Opposition leaders were under the “false impression that the people had forgotten their corruption”, but they were wrong as now, they had fallen into the “captain’s trap”.”I predict that not only is their no-confidence motion going to fail, but they will taste defeat in the 2023 general elections as well,” he said, foreseeing his party’s triumph in the polls. Moving on to praise overseas Pakistanis, he thanked them for supporting the country and sending a record remittance through which the state was running its economic affairs. “But when overseas Pakistanis, who are working hard abroad, see these corrupt politicians enjoying parties and living in palaces in foreign countries, they are hurt,” he lamented. PM Imran Khan said due to the corruption of the politicians, the country had become a “slave” to the foreign powers. “When our then prime minister [Nawaz Sharif] met then US president Barack Obama, his legs were shaking as he was cautious against saying something his ‘master’ might feel bad about.” “Because they know [those countries] can catch their [corrupt Pakistani politicians’] money laundering whenever they want,” the prime minister said.