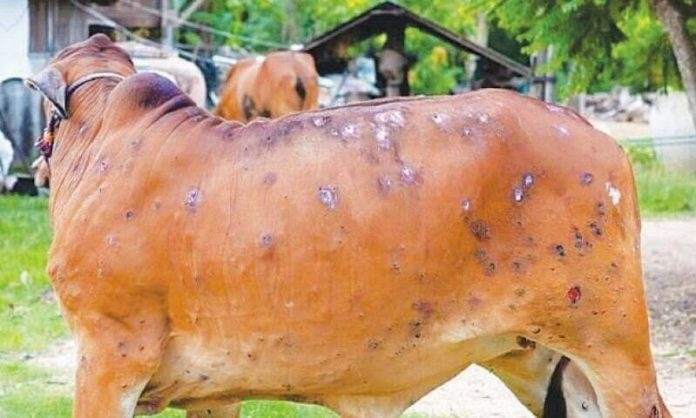 KARACHI: (Hannan Ali Narejo) As many as 171 animals have died owing to an infectious disease of lumpy skin among cattle in Sindh, according to a provincial task force report. According to the report, the lumpy skin disease (LSD) has so far been found in 23,227 animals in the province, 171 of whom have died. Addressing a press conference at the Sindh Assembly, the livestock minister said the disease had affected 16,000 cows in Karachi, and the detection rate in the province was 0.9 per cent. Pitafi said the disease had been present in the world for the past 100 years, but its first case in Sindh was reported in November last year. Originally found in Africa, lumpy skin disease, a viral infection of cattle, has spread to countries in the Middle East, Asia, and eastern Europe, experts said. The concerned department, however, has yet to disclose its strategy to tackle the disease and whether the virus could transmit into humans consuming meat or milk of the infected animals. The dairy farmers had earlier demanded an immediate intervention of the government to control the viral disease. They had also demanded specialist advice and provision of medicines to cattle farmers to tackle the disease. The lumpy skin disease is transmitted by blood-feeding insects, such as certain species of flies and mosquitoes, or ticks. It causes fever, nodules beneath the skin and can also lead to death, according to experts. According to an alert “Human disease has not been well documented. Consuming meat or milk doesn’t transmit the infection to human,” it said. However, it advised that food safety should be ensured which included consumption of only pasteurised or well-boiled milk and milk products, thorough cooking of meat, and proper washing of hands with soap and water after handling meat Sindh government has decided to shut down cattle markets across the province amid the emergence of the infection in animals.