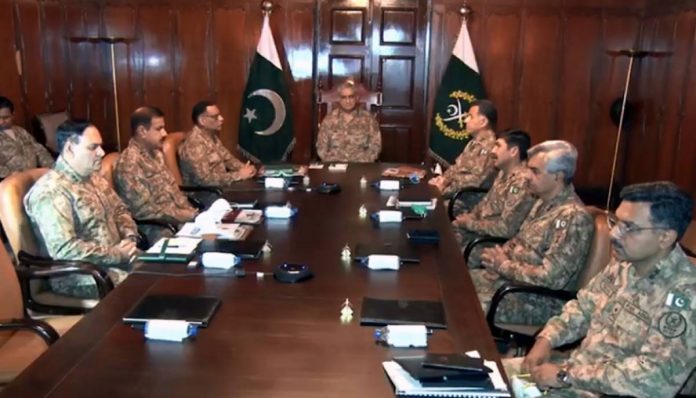 RAWALPINDI: The Corps Commanders’ Conference warned on Tuesday that the “accidental” firing of a missile by India could have acted as a “trigger” that would have “seriously” endangered regional peace and strategic stability. According to a statement by the Inter-Services Public Relations (ISPR), Chief of Army Staff General Qamar Javed Bajwa chaired the 248th Corps Commanders’ Conference at the General Headquarters (GHQ) in Rawalpindi. The military’s media wing said that the forum was given a comprehensive briefing on important global and regional developments, the internal security situation in the country, and progress on the western border management regime. The ISPR said that the country’s top military brass expressed “concern” regarding recent “accidental missile firing” by New Delhi. The conference was of the view that the accident, as claimed by India, could have resulted in a major disaster. The forum emphasised that despite New Delhi’s acknowledgement of the incident, “relevant international forums must take a serious view of the incident and subject the safety and security protocols of Indian strategic assets to deliberate oversight”. “Such dangerous incidents can act as a trigger and seriously endanger regional peace and strategic stability,” said the forum. The conference was held after India had claimed last week that it had accidentally fired a missile into Pakistan because of a “technical malfunction” during routine maintenance. “On 9 March 2022, in the course of routine maintenance, a technical malfunction led to the accidental firing of a missile,” the Indian government had said in a statement. The statement came a day after Director-General of ISPR Major General Babar Iftikhar revealed that an Indian projectile had entered the Pakistani airspace and fell near Mian Channu in Khanewal district, causing some damage to the surrounding areas.  Briefing journalists about the incident, the DG ISPR had said: “At 6:43pm [on Wednesday], a high-speed flying object was picked up inside the Indian territory by the Air Defence Operation Centre of the Pakistan Airforce.” “From its initial course, the object suddenly manoeuvred towards the Pakistani territory and violated Pakistan’s airspace [before] ultimately falling near Mian Channu at 6:50pm.” He had said that when the projectile fell, it damaged some civilian property. “Thankfully, no loss or injury to human life was caused.” Apart from India’s “accidental” missile firing, the conference also reviewed the internal situation of the country.   The ISPR said that the army chief lauded the successful ongoing counter-terrorism operations in the country. The forum also expressed resolve to take all requisite measures to ensure the security of the country.