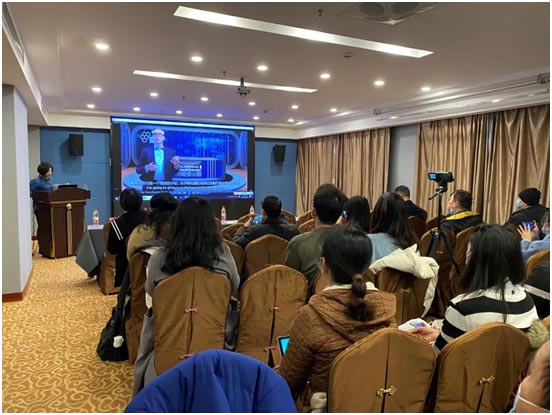 To translate scientific and technological achievements into products, the last crucial hurdle in aspects such as policies, capital, patent filing, and market has to be addressed.

In an effort to strengthen communication between industries and research institutes, Hubei province in central China has nurtured technology commercialization agents and built an education and management platform for these talents.

Wuhan Zhixiang Robot Co. Ltd. based in Wuhan, capital city of Hubei province, is a beneficiary of the program for cultivating technology commercialization agents. The company has developed a parking robot which is able to lift the car up and move it to the designated spot with an assistance system based on visual positioning and radar sensing.

“Technology commercialization agents helped us a lot in developing the parking system based on just a blueprint,” according to Li Yuanming, founder of the company.

In 2013, Li, together with a PhD student from Wuhan University and two professors from Wuhan Institute of Technology, started to develop an automated robotic parking system.

In the early days after they kicked off the business, Li took part in some meetings and shows in an attempt to access more technologies and resources. However, these activities turned out not as effective as he had expected in helping find the technologies he wanted.

During such events, there was no sufficient time for the entrepreneurs, the investors, and the scientific institutes to know about each other, and they always failed to reach consensus. More often than not, no further communication was sought after the conclusion of these activities.

Li’s company was not the only one that had encountered difficulties in looking for the right sci-tech achievements for the development of products. According to Chen Hanmei, director of the Hubei Technology Exchange, there are quite a lot of scientific and technological achievements in need of commercialization, as well as small and medium-sized enterprises (SMEs) in need of new technologies.

However, these SMEs are not capable enough of mobilize resources and foresee their technological needs, and their R&D personnel lack enthusiasm for releasing relevant information, Chen said. She also pointed out that the shortage of technology transfer talents can also lead to a low rate of success in matchmaking between technology and market.

In 2015, China’s Ministry of Technology and Science initiated the construction of a technology transfer talent cultivation system. Three years later, the Department of Science and Technology of Hubei Province and the Hubei Technology Exchange started establishing an online education and management platform for technology commercialization agents, the first of its kind in China.

“The platform systemically integrates various training courses designed for technology commercialization agents, and is open to the whole country,” Chen said. By making use of the online courses and taking part in offline practice programs, trainees can master patent application, fund raising, and business negotiation skills, among others, Chen explained.

Xi Chunguang and Liu Lu, two of the second batch of trainees of the school, co-founded a company. Liu is in charge of project analysis, studies and evaluation, while Xi is in charge of resource matchmaking.

In 2018, Li found Xi and Liu and asked them to help find suitable technologies for his company. At that time, a major technological problem Li and his team encountered was to tackle the impact different lighting conditions had on the accuracy of parking.

While looking for a suitable expert to solve the problem, the two found out that the State Key Laboratory of Information Engineering in Surveying, Mapping and Remote Sensing, Wuhan University, might be a good option. Several months later, Wu Huayi, deputy director of the laboratory, joined Li’s team as chief scientist, taking on the task of making breakthroughs in key remote sensing technologies.

After Li’s team strengthened its weak links in technology and as the robotic parking system entered its testing stage, a key task for Li and his team was to promote the product.

After conducting market surveys and providing survey reports, the technology commercialization agents then engaged themselves in market operations for Li’s company, looking for potential clients. Thanks to these agents, the company won contracts from multiple urban construction investment companies and construction companies in cities across the country. In December 2019, Wuhan Zhixiang Robot Co. Ltd. built its first intelligent parking facility at a hospital in Wuhan.

In the past, a major job for technology commercialization agents was to address information asymmetry between research institutes and enterprises, thus introducing the two sides to each other. As the technology transfer market becomes increasingly mature and further expands, technology commercialization agents are accordingly becoming more professional and the profession becoming further streamlined.

“The same technology, when applied in different scenarios, helps create different products. In addition, by adopting different models of business operations, we can achieve different results. So, we must make sure that our services are more systematic and deep-going,” said Liu.