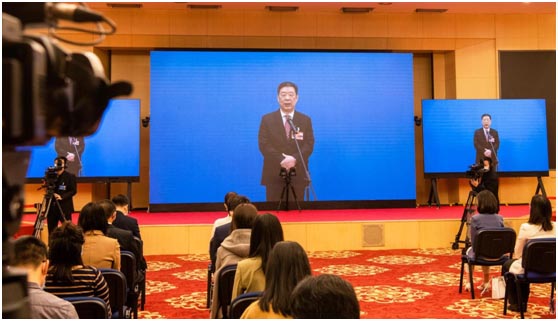 By Li Changyu, Wang Hui, Guo Xueyan, People’s Daily
Members of the 13th National Committee of the Chinese People’s Political Consultative Conference (CPPCC) were interviewed via video link ahead of the opening of the fifth session of the 13th CPPCC National Committee at the Great Hall of the People in Beijing on March 4.
Zhou Jianping, a member of the 13th National Committee of the CPPCC, also chief engineer of China’s manned space program, introduced China’s aerospace plans for 2022.
China’s space station construction entered the full implementation stage last year, and the core module of the space station is in good conditions after over 10 months of in-orbit operation, Zhou introduced.
He said the Shenzhou-13 spaceship has been in orbit for around 140 days, during which its crew members have maintained good health and a great work-life balance.
They have completed both planned missions and those newly assigned while they were in orbit, and are scheduled to return to Earth in mid-April, he noted, adding that the return will mark the conclusion of the verification of key technologies of China’s space station.
Zhou said that analysis and preliminary assessment of flying data indicated that all systems of the manned space program are technically qualified, with their major functions and performance beyond design objectives.
The chief engineer introduced that China will launch two laboratory modules, two manned spaceships and two cargo crafts this year, and the Shenzhou-15 crew will fly to the space station before the end of this year and join the Shenzhou-14 crew in space.
At that time, the space station will consist of three modules, two manned spacecrafts and one cargo spacecraft, Zhou said.
The space station will host six astronauts and carry a large number of high-level space experiment devices covering fields such as life sciences, biological science, and material science, he said.
“China contributes nearly 30 percent to the world’s manufacturing,” said Liu Mingzhong, a member of the 13th National Committee of the CPPCC, who’s also the board chairman and Party secretary of China First Heavy Industries, during the joint interview.
Liu said high-quality development of equipment manufacturing is a vital part of China’s high-quality development and is indispensable to a modern major country.
“Since the 18th National Congress of the Communist Party of China, the country has attached high importance to the development of equipment manufacturing. It has grown into a world-class manufacturer of high-speed rail, nuclear power, hydropower, and metallurgy equipment. In particular, it is leading the world in manufacturing technologies of petrochemical engineering equipment,” Liu said.
He noted that China will carry out reforms to encourage innovation and entrepreneurship, promote independent innovation, and build more creative centers involving enterprises, universities and research institutes, so as to strengthen the resilience of the industrial chain of equipment manufacturing.
During the joint interview, member of the 13th National Committee of the CPPCC Li Yingxin, who’s also the vice-president of the Tongzhou District People’s Court of Beijing, introduced how circuit court trials have brought fairness and justice closer to people.
To illustrate her point, she shared a story of a migrant worker surnamed Zhang, who filed a lawsuit against his contractor because the latter refused to compensate him for his work injury.
After Li received Zhang’s case and learned that the man could not appear in court as he was hospitalized, she moved the hearing to Zhang’s bedside. Doctors and patients, surprised by the circuit court trial in Zhang’s ward, all gave the thumbs up to Li after they witnessed the hearing.
In recent years, circuit court trials have embraced constant innovation and development thanks to the wide application of internet technologies, and courts have been moved online. In 2020, courts at all levels in Beijing conducted more than 280,000 online trials. The number surged to 480,000 last year.
Thanks to circuit court trials, more and more judges don’t have to travel across mountains and rivers, and litigants can have their cases resolved at their doorsteps, Li said, adding that circuit court trials have further implemented the notion of judicial service for the people and reinforced their relationship with judges.