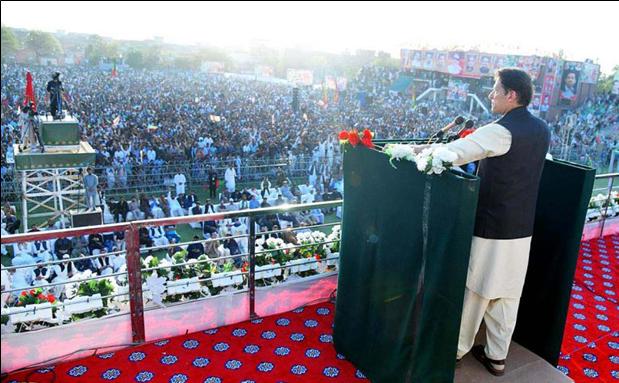 HAFIZABAD: Prime Minister Imran Khan Sunday said that unless a nation stood united against corruption, injustices and sex crimes, these forms of evils would continue to bulge, resulting in the degeneration of a society. Addressing a mammoth crowd here, the prime minister said that a true leader would not bow or please anyone at the sake of his nation and country. “Our previous prime minister sat before the US president trembling and holding a paper in his hand. Will such kind of leaders raise self-respect of a nation!” he said without naming former prime minister Nawaz Sharif’s meeting with former US president. The prime minister said a true leader always raised a nation’s spirits and cited the precedent of founder of Pakistan Quaid-e-Azam Muhammad Ali Jinnah. “The world respects that individual or the country that has self-respect,” he opined. The prime minister reiterated that Pakistan wanted equal ties with all the countries. “But as a prime minister of a country with 220 million population, it is my first and foremost duty to protect their rights and interests of the country. I will not allow any policy which can inflict any harm to the motherland. I will not compromise upon the national interests just for seeking the pleasure of any country,” he stressed.
The prime minister referred to his US visit, where he stayed in a room of Pakistan Embassy . Taking pride in shalwar kameez, the prime minister said that he did not spend 1.2 or 1.4 million dollars as wasted by Zardari and Nawaz Sharif during their visits.