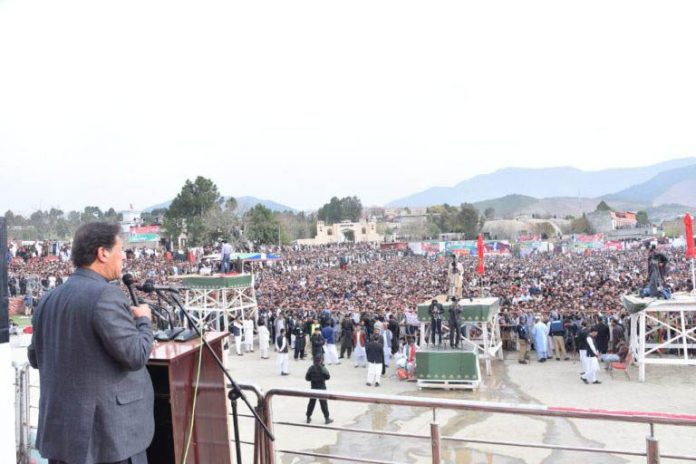 TIMERGARA: Prime Minister Imran Khan on Friday vowed to defeat the opposition parties’ no-trust motion, saying he would bring three wickets down with an in-swinging yorker. “Insha Allah, your captain will win this match of no-trust motion in the parliament”, Imran Khan said while addressing a huge public gathering at Blambat Ground in Timergara, the district headquarter of Lower Dir. Referring to the opposition’s no-confidence motion, the Prime Minister said he has been wishing for such a move by them, who have been talking to dislodge his government by hurling threats of sit-ins or long marches. “Insha Allah everything will stand transparent. No-trust motion has provided me an opportunity to take three wickets with one ball,” Imran Khan maintained. The Prime Minister on this occasion also announced to hold a mammoth Pakistan Tehrik-e-Insaf (PTI) rally at D-Choke, Islamabad, on a day before voting on the no-trust motion in the National Assembly.
“A day before the no-trust move [in National Assembly] Insha Allah there will be a sea of people at D-Choke,” he said.
The Prime Minister described Nawaz Sharif, Asif Ali Zardari and Maulana Fazlur Rehman – the leaders PML-N, PPP and JUI-F – as a “bouquet of thieves” and today they were at his aim.
Foreign Minister Makhdoom Shah Mahmood Qureshi and Chief Minister Khyber Pakhtunkhwa Mahmood Khan also addressed the public gathering.
Prime Minister Imran Khan referred to the statement of Maulana Fazlur Rehman made at a press conference about the country’s important institutions, and maintained that Pakistan was today secure due to a strong army.
He cited the examples of destruction – due to wars – in Islamic countries including Iraq, Syria, Libya and Afghanistan and said that countries without the strong defence were not secure.
The Prime Minister then referred to some past incidents like attacks against courts, attempts to buy judges to secure favorable verdicts, influencing journalists and remarked that the people, who had damaged institutions in the past, were talking now talking about improving the institutions.
He said that Nawaz Sharif, who was now sitting abroad and went to speak lies about his health and earlier through a deal with former President Pervez Mushhar, started the politics of “Changa Manga” and buying the loyalties of the members of parliament.
The Prime Minister said that Nawaz Sharif, who once tried to bribe a former army chief by offering a BMW, also held a secret meeting with Indian Prime Minister Narendra Modi in Kathmandu.