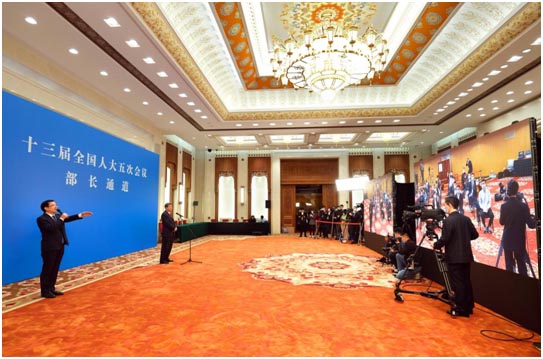 By ZhangZihan, People’s Daily
Heads of three State Council departments were interviewed via video link after the opening meeting of the fifth session of the 13th National People’s Congress (NPC) at the Great Hall of the People in Beijing on March 5.
Introducing China’s current situations and development prospects, and answering questions on national strategies and livelihood issues, they demonstrated China’s confidence in its future economic and social development.
According to the government work report delivered this year, energy consumption per unit of GDP will be assessed with appropriate flexibility within the framework of the 14th Five-Year Plan, and newly added renewable energy and coal, petroleum, and natural gas consumed as raw materials will be excluded from the total amount of energy consumption.
Besides, the country is planning to transition from assessing the total amount and intensity of energy consumption to assessing the total amount and intensity of carbon emissions.
He Lifeng, head of the National Development and Reform Commission (NDRC), noted that China will give a great impetus to its work related to carbon peak and carbon neutrality this year in a well-ordered manner.
To peak carbon dioxide emissions before 2030 and achieve carbon neutrality before 2060 is a major strategic decision made by the Communist Party of China (CPC) Central Committee, he said.
He introduced that China has made orderly progress in carbon peak and neutrality over the past year. Strengthening top-level design, it has issued a working guidance for carbon dioxide peaking and carbon neutrality and an action plan for carbon dioxide peaking. Implementation plans in major areas have also been made and constantly rolled out.
The country has comprehensively promoted the implementation of the top-level design. Now, all industries are going through upgrading according to new standards and vigorously launching green and low-carbon projects.
He said the NDRC will faithfully implement the strategies of the CPC Central Committee and the State Council to advance the work related to carbon peak and carbon neutrality in an well-ordered manner, and avoid campaign-style approaches.
According to the government work report, China has set the deficit-to-GDP ratio for 2022 at around 2.8 percent, slightly lower than last year.
Minister of Finance Liu Kun noted that the ratio is down by 0.4 percentage point, which means a reduction of 200 billion yuan ($31.65 billion). However, there will be an increase in the central government’s fund allocation of 1.267 trillion yuan this year, he said.
“This increase is equivalent to a one-percentage rise in the deficit-to-GDP ratio, which guarantees the intensity of fiscal expenditure,” Liu explained.
The finance minister said China’s tax refunds and cuts are expected to total around 2.5 trillion yuan this year, the highest in history. Meanwhile, the country will extend tax and fee reduction policies that support manufacturing, micro and small enterprises.
VAT credit refunds will account for 1.5 trillion yuan and all go straight to enterprises, and central government transfer payments to local governments will be significantly increased to help the latter relieve the pressure of revenue decrease and ensure the implementation of tax and fee reduction policies, he said.
The Ministry of Finance will earnestly fulfill its duties to bring the real benefits of tax and fee reduction policies to enterprises and individuals as early as possible, Liu added.
To achieve grain output of over 650 million metric tons is a main projected target for development in the government work report. Tang Renjian, Minister of Agriculture and Rural Affairs, said apart from securing summer grain harvest, China will also ramp up efforts to ensure harvests throughout the year.
Tang introduced that per capita food availability in China has increased nine kilograms to 483 kilograms this year. “Under such circumstances, whatever changes take place globally, we are capable of ensuring that more than 1.4 billion citizens have enough food to eat. Our rice bowls will be held more firmly in our own hands, and will be filled with better and healthier food,” he remarked.
The government work report proposed to boost agricultural production and promote all-around rural revitalization. China will refine and strengthen policies in support of agriculture, continue promoting development in areas lifted out of poverty, ensure good harvests, and promote growth in rural incomes.
Tang noted that China will make sure that it doesn’t cross the redline of people falling back into poverty and that people have the self-motivation to live a better life.
China will improve its dynamic monitoring system that prevents the re-emergence of poverty, Tang said, adding that the country will also rely on industry and strengthen areas of weakness such as technology, equipment, marketing and talent pool. Besides, China will also enhance its assistance for major areas, fields and groups, Tang said.