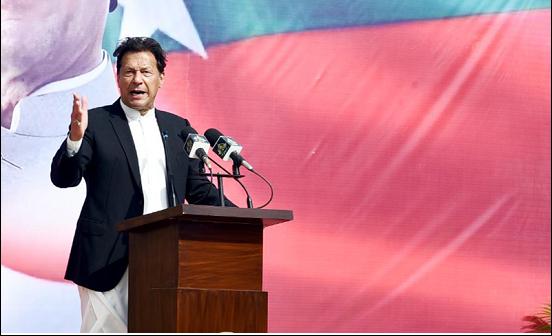 KARACHI: With the no-confidence motion submitted to the National Assembly secretariat, Prime Minister Imran Khan announced on Wednesday that after winning the trust of the lower house, he would turn his gun towards former president Asif Zardari.   Addressing charged PTI workers at the Governor House in Karachi, PM Imran Khan claimed that the motion is the “political death” of the Opposition. “I was telling my team that they (Opposition) have done what I was praying for,” said PM Imran while speaking to the party workers during his day-long visit to Karachi — which was aimed at gaining assurance from MQM-P for their support amid the no-trust motion. “No-confidence motion is their political death,” PM Imran Khan told his workers about the Opposition. The premier said that he was waiting for the “gang of robbers” as they were claiming after “every two months” that the government would be leaving. “I was thinking somehow their necks come in my hand,” said PM Imran Khan, adding that he wanted the Opposition to submit the motion. The premier claimed that the Opposition has become “trapped” after submitting the no-confidence motion. He added that he has planned his moves for the future and will not stop once he “wins” the backing of the National Assembly. “
My hands were tied, so far. The shackles that were on my hand will be broken. My first target will be Asif Ali Zardari on whom my gun has been pointing at for a long time,” said PM Imran.