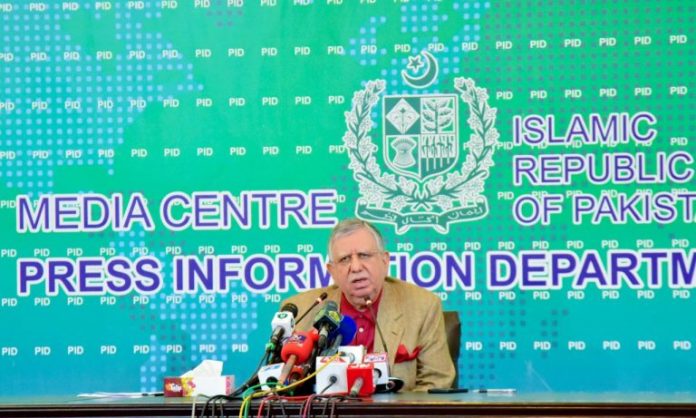 ISLAMABAD: Finance Minister Shaukat Tarin on Wednesday expressed his opposition to Prime Minister Imran Khan’s public outburst against European Union envoys in a rally in Vehari. Speaking to the media in Islamabad, Tarin said the PM should not have slammed the EU envoys in front of the public. The PM in his speech on Sunday had lashed out at the EU states for asking Pakistan to vote against Russia at the United Nations General Assembly (UNGA) and condemn the invasion of Ukraine. “EU ambassadors wrote a letter to Pakistan, asking us to issue an anti-Russia statement. I ask EU ambassadors did you write that letter to India as well?” PM Imran had said. “When India broke international law in Kashmir and abrogated Kashmir’s autonomous status, did anyone of you break ties with India, end trade or criticise [New Delhi]?” he continued. “What are we? Are we your slaves? Do we do what you say?” the premier had stated, inviting criticism from the Opposition. Responding to a question today about the prime minister’s speech, Tarin said: “I think the prime minister should not have said in public what he said.” To another query regarding the FATF’s decision to keep Pakistan on the grey-list, he said it is a political decision by the anti-money laundering watchdog. “Pakistan has complied with 26 of the 27 conditions,” he said. The finance minister said the government is providing a subsidy of Rs104 billion on petroleum products in order to provide relief to the people. He said given the soaring prices of petroleum products in the international market, the government has reduced the petroleum levy and brought to zero the sales tax. Shaukat Tarin said that those using 700 units of electricity per month will be provided with a subsidy of five rupees per unit for the next four months. For this, he said, we will have to give a subsidy of 136 billion rupees. The minister said negotiations have been held with the IMF over this relief package announced by the prime minister. “The IMF should not have objections on the package as we are meeting it from our own resources including enhancement in tax revenues. This [relief package] will not increase our fiscal deficit.” Shaukat Tarin said the government has also given industrial relief package to promote industries in the country. He said the package envisages tax holiday for overseas Pakistanis and incentives for the turnaround of sick industries. The finance minister said tax exemptions have also been given to the IT sector in order to significantly bolster its exports. He pointed out that the IT sector grew by 47% last year and currently growing by 70%. He said they are targeting 100% growth in this sector during the next year. Shaukat Tarin said our trade deficit has also come down but due to heightened political activity, this good news was overshadowed.