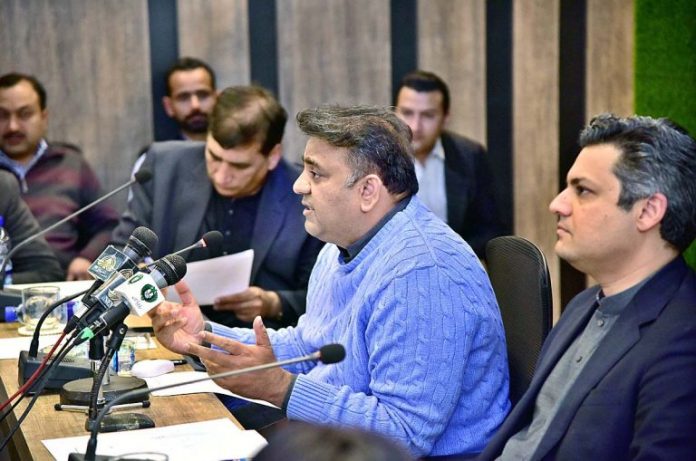 ISLAMABAD: Minister for Information and Broadcasting Fawad Chaudhry on Wednesday called on the National Assembly Speaker Asad Qaiser to convene the session of the lower house after the Opposition filed a no-confidence motion against Prime Minister Imran Khan. PM Imran Khan enjoys the support of the majority of parliamentarians, and the Opposition’s no-confidence motion was “destined to fail”, Chaudhry said while addressing a press conference alongside Minister for Energy Hammad Azhar. The information minister said around 184 members of the National Assembly “strongly” support PM Imran Khan. Chaudhry said PML-N and PPP have been involved in horse-trading in the past, and now, PML-N supremo Nawaz Sharif and PPP Co-chairman Asif Ali Zardari are “taking this practice to new heights.” The information minister said Imran Khan was the “sole challenger of these merchants of horse-trading”.”Nawaz Sharif and Asif Ali Zardari believe in politics of money and looting and stashing national wealth abroad […] they are offering millions of rupees to buy the loyalty of our members,” Chaudhry said. Chaudhry said JUI-F and Pakistan Democratic Movement (PDM) chief Maulana Fazlur Rehman had also gotten personal benefits from the government of former prime minister Benazir Bhutto. He said Fazl has also been accepting money from foreign forces. The information minister announced that now the government would not engage in any kind of talks with the Opposition and would “treat it like criminals.” Speaking on the occasion, Hammad Azhar said the prime minister had put the country’s economy on the path of growth and development. Azhar said PM Imran Khan is pursuing an independent and strategic foreign policy in the best interest of Pakistan.