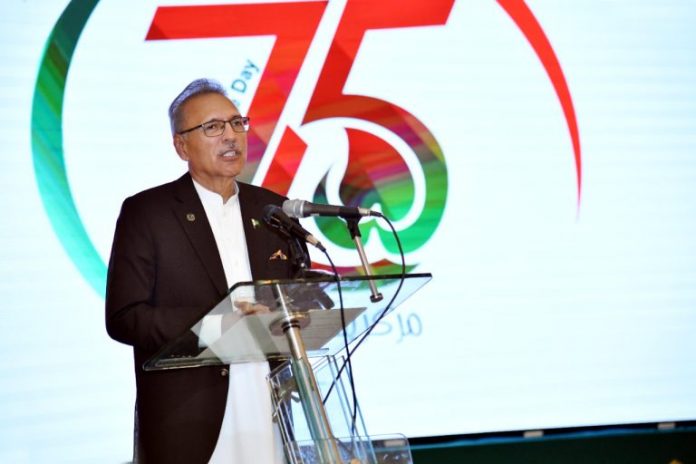 ISLAMABAD: President Dr Arif Alvi Monday stressed upon the need to create comprehensive awareness among the young generations about different aspects of the historic movement for creation of Pakistan through various mediums of information. The president was addressing a ceremony after unveiling a logo in connection with the observance of upcoming 75th Independence Day celebrations at the Aiwan e Sadr. The president lauded efforts of Minister for Information and Broadcasting Chaudhry Fawad Hussain and the ministry for the launch of logo and other preparations to mark the diamond jubilee celebrations of the country. The president said the logo would be a reminiscent for the chequered history of Pakistan and the achievements made during the last 75 years. He said the people of Pakistan had endured hard times, but now in the last few years, the country had made huge strides in different sectors. The president observed that India with its anti-Muslim policies, genocide and suppression of other minorities in India had vindicated the ‘Two-Nations’ theory. Khushwant Singh, a writer in his book “End of India”, had already predicted destruction of India with its tyrannical policies targeting minorities, he added. Quaid-e-Azam Muhmmad Ali Jinnah and Allama Muhammad Iqbal had separated their ways after realizing the hidden intentions of the Hindu leadership, he said, adding the young generations of the country should be made aware of different untold events of the historic freedom movement.“Pakistan was created in a democratic manner”, he said. The president said machinations and conspiracies were hatched against the newly created country and through a plan, an access to Kashmir was provided to India through Gurdaspur. The Muslims of Indo-Pak had gone through tumultuous periods in their struggle for the creation of a separate homeland and rendered huge sacrifices, he added. Citing Indian Illegally Occupied Jammu and Kashmir issue, the president said Pakistan had entrusted the United Nations to resolve the issue and reiterated that Pakistan would continue its efforts till resolution of the Kashmir issue.