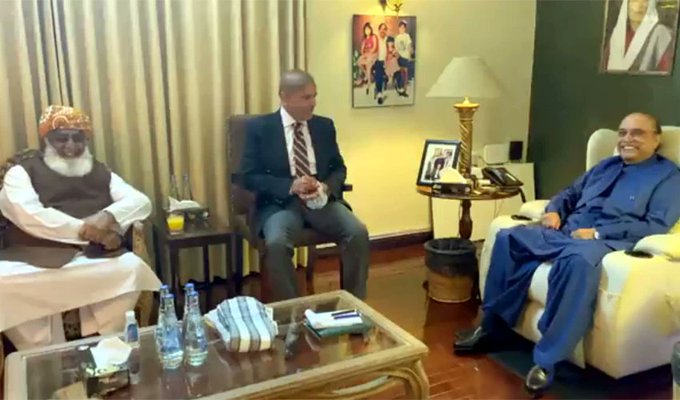 ISLAMABAD: A meeting among the Opposition leaders Maulana Fazlur Rehman, Shahbaz Sharif, and Asif Ali Zardari has started to finalise the date to move the no-confidence motion against Prime Minister Imran Khan. The meeting is taking place at the Zardari House and PML-N leaders Khawaja Saad Rafique and Ayaz Sadiq are also in attendance, meanwhile, PML-N Secretory-General Ahsan Iqbal, Rana Sanaullah, Adviser to Chief Minister of Sindh on Law and PML-N Vice-President Maryam Nawaz have also joined the meeting.  Earlier today, PDM chief and PPP leader Khurshid Shah had said that the date to present the no-confidence motion will be announced soon. During the joint press conference, Shah reiterated that move will be brought about at the earliest to get rid of the PTI-led government. Speaking to journalists, Fazl said that the nation will get the expected results within 48 hours. Talking about PM Khan, he said: “He is someone who uses foul language, he cannot threaten us.” The JUI leader said that he has no contact with PTI’s Jahangir Tareen. “Whether the motion fails or succeeds, it is a political process and constitutional right.”